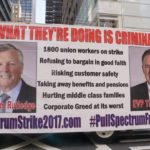 across the Brooklyn Bridge. This time with unions from around the nation and lead by both AFL-CIO president Richard Trumka and Governor Andrew M. Cuomo as well as IBEW Local 3 Business Manager Chris Erikson. The march is starting on the Brooklyn side of the bridge at 3pm, then ending up on the Manhattan side at Foley Square around 4pm. Thousands are expected to be walking across the bridge with the Local 3 strikers.

Battling for six month, 1,800 IBEW Local 3 members have been on the picket line in their fight with Spectrum/Time Warner Cable in New York and New Jersey since March 28th. For six months the company has been relying on scabs to maintain operations. The main issue is that Spectrum wants to eliminate the defined benefit pension plan and replace this with a 401K program. At the same time the company is asking for givebacks, Spectrum’s profits are soaring and their executives are raking in millions. Although its estimated that the cost to Charter would $150 million in liability payments to sever its obligations, the company is demanding the end of the defined benefit pension plan for their workers.

Negotiations over the last several months have been fruitless as Charter/Spectrum employees continue on strike. Although customer service has been severely deteriorated by the use of scabs, Spectrum refuses to soften their position. Charter Communications bought Time Warner Cable (TWC) for $55 billion in May, 2015 and renamed it Spectrum.

Commending on LaborPress Blue Collar Buzz on AM970, Derek Jordan, business representative for Local Union 3 said, “Our members have been on strike for months and they are hurting along with their families. But they are still holding strong against Charter/Spectrum and corporate greed. We all know what this is called. This is Union Busting!!”.

Governor Cuomo said: “Reliable, quality healthcare and the ability to retire with dignity are key cornerstones of the middle class, and that cannot be compromised.  Whether it’s ultra-conservatives in Washington or a corporation doing business here in New York, we will not stand by while access to health care is stripped away from hundreds of working families. In New York, we not only believe that all workers have a right to quality and affordable health care, we stand up and fight to ensure it. These hard working men and women are the reason why our information superhighway and tech sector are thriving here in the State of New York and they deserve our support.

Continued Cuomo, “We just celebrated Labor Day here in New York City, but we can’t say we support labor if we show up for the parade and not the critical fights where our shared progress is on the line.  ‎This is about protecting and expanding progress for workers and their families, and there is no more important fight then ensuring they don’t have to pay MORE for LESS health care.  Corporate giants like Charter/Spectrum need to hear the message loud and clear: in New York, we fight for the middle class and stand with labor, and we will not go back.”