NEW YORK, N.Y.—Wearing orange-and-black facemasks and waving “I AM WORTHY” signs that evoked the landmark 1968 strike by sanitation workers in Memphis, more than 200 construction workers rallied in Manhattan Sept. 15, as Laborers’ Local 79 and the Mason Tenders District Council launched a campaign against the “body shop” system of supplying low-wage nonunion labor to contractors. 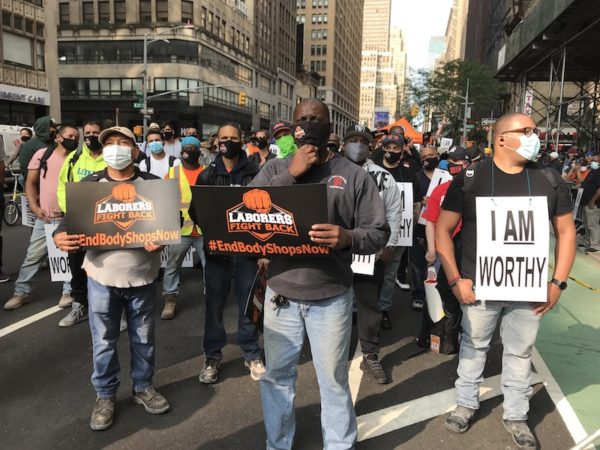 “As a foreman, I’m ashamed to tell you what I get paid,” John Simmons, who’s worked for the Long Island-based Marin Laborers for the last four years, told the crowd on Seventh Avenue between 28th and 29th streets. “I’m all for stopping the body shop, because it’s modern-day slavery.”

“Body shops” are companies that supply low-wage, nonunion workers to developers in the city. Laborers officials have described their business model as a combination of the “crew chiefs” who recruit migrant farmworkers and Amazon’s method of hiring warehouse workers through subcontractors, to avoid direct responsibility for their wages and conditions. Mike Hellstrom, secretary treasurer of Laborers Local 108, calls it “labor laundering, instead of money-laundering.”

Marin Laborers advertises itself as “a non-union, non-prevailing wage, construction labor and janitorial service company servicing the New York City area and Long Island.” TradeOff, which last July agreed to pay 18 women workers $1.5 million to settle sexual-harassment complaints, claimed it provided a nonunion workforce at “a substantial cost benefit” by giving job opportunities to former prisoners and “minority and immigrant ‘skilled’ workers who had previously been excluded from the construction trade workforce.”

These companies are taking advantage of the penal system, Hellstrom says: Former prisoners who need to hold a job to avoid violating their parole are easily exploitable.

“You have to be employed or they send you back to prison,” Simmons says. “You complain, you lose your job.”

The rally took place outside the Manhattan headquarters of Consigli, a fast-growing Massachusetts-based general contractor whose recent projects include the Vornado Realty headquarters in Chelsea, a 25-story apartment and retail building in the Essex Crossing development on the Lower East Side, and an office building on the Williamsburg waterfront in Brooklyn. The Laborers say it has been obtaining workers through a body shop known as SLG Construction or Spacious Living Group.

SLG, founded in 2008, boasts that it carries out jobs “with our own workforce.” In late 2018, Local 79 filed two sets of charges with the National Labor Relations Board, accusing it of illegally firing or disciplining laborers who tried to organize. The company settled both cases informally.

“We’re going to fight until we rid this industry of this exploitative model,” says Hellstrom. “Developers, general contractors, subcontractors—they’re all responsible, up and down the chain.” He says the campaign will use both street protests and lobbying for legislation.

Simmons, 50, says he went to work for Marin Laborers after he got out of prison, and worked his way up to foreman, where he makes $21 an hour with “no benefits at all.” Regular laborers get the $15 minimum wage. The company, he adds, promised him incentives for recruiting new workers; he brought in at least 60, but got nothing.

“They don’t invest in training. They do everything online,” he told the rally—with the result that new workers come on the job and “don’t know a hammer from a screwdriver.”

Hellstrom sees the body shops, which have moved into commercial, residential, and affordable-housing construction, as part of an overall attack on union wages and standards in the metropolitan area during the last five or six years. Though they’re “shell companies”—TradeOff, he says, didn’t have the infrastructure to survive having to pay the $1.5 million settlement—their use enables developers and contractors higher on the food chain to insulate themselves while pressing those lower down to cut labor costs.

This attack has come, he continues, as older white workers retire, and black and Latino workers coming in as apprentices and journeymen make up a larger share of the building trades’ membership.

“I don’t think that’s coincidence,” he says. “That’s my opinion.”

“We’re here to fight for everyone who’s working these jobs,” Local 79 organizing director Chaz Rynkiewicz told the rally. “When I go to a Local 79 meeting, it’s like one-third white, one-third black, one-third Latino, and everybody’s chilling together. That’s why we’re going to win.”