Millions of New Jobs If We Go Green, Analysts Say

New York, NY – The Presidential Election of 2020 is less than eight weeks away — and to garner more votes, Danielle Deiseroth, a climate data analyst for Data for Progress and recent panelist for the DNC Climate Council, believes Democrats need to campaign on green jobs now more than ever. 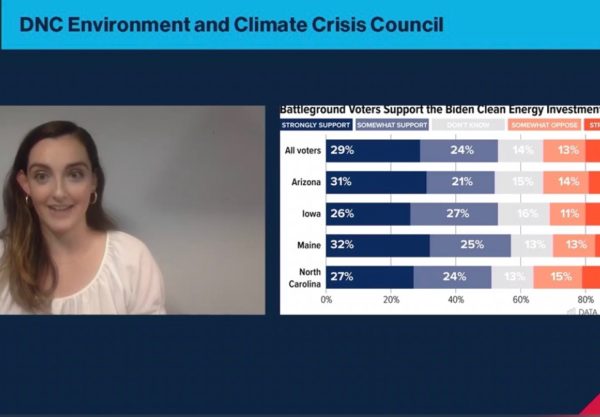 “We know that to accomplish the goal of transforming the electricity grid to run on completely carbon free energy by 2035 that job creation will be in the millions.” — Danielle Deiseroth, climate data analyst.

“We tested the figures,” says Deiseroth. “Millions of good-paying clean energy jobs [could be created].”

Just transforming one aspect of the energy system in the U.S. — the electric grid — could create millions of green union jobs, according to Deiseroth, who recently spoke with LaborPress.

In 2019, the U.S. Energy Information Administration website stated that only 18% of electricity generation is from renewable energy. About 20% is nuclear energy and the remaining 63% is from fossil fuels. Converting the remaining parts of the grid with renewable energy would mean an 82% overhaul.

“We know that to accomplish the goal of transforming the electricity grid to run on completely carbon free energy by 2035 that job creation will be in the millions,” said Deiseroth. “There is definitely really good signs that [Vice President Joe] Biden’s campaign will be prioritizing labor and unions in his clean energy plan, and making sure that all voices are represented in developing the plans further.”

While Deiseroth doesn’t have concrete numbers on how many millions of jobs could be created under Biden’s Build It Back Better jobs and economic recovery initiative, she knows AFL-CIO President Richard Trumpka is serving as an advisor for that job creation strategy..

The green aspect of his job plans include “investing in a modern, sustainable infrastructure and sustainable engines of growth — from roads and bridges, to energy grids and schools, to universal broadband,” according to Biden’s campaign website. “Updated proposals to meet the climate crisis [will] build a clean energy economy, address environmental injustice, and create millions of good-paying union jobs.”

Also, on the agenda are housing (1.5 sustainable homes and housing units); agriculture & conservation (250,000 jobs to those that abandon fossil fuel jobs for climate-smart agriculture and conservation); and environmental justice (creating good, union, middle-class jobs in communities left behind, righting wrongs in communities that bear the brunt of pollution, and lifting up the best ideas from across our great nation – rural, urban, and tribal).

A similar green energy plan is being led in New York City by Councilman Costa Constantinides (D-Astoria), who sponsored the Climate Mobilization Act in 2019, and was also a participant on the DNC Climate Council.

In 2019, Constantinides championed land use decisions that include labor components, legislation that for an office to investigate workplace mistreatment, a commission to study a four-day work week and a push for 50,000 green jobs in Queens.

“It is so very important that we push forward a real agenda based on science, based on environmental justice and based on ensuring every community is part of the process and protected,” said Constantinides. “We need serial activists more than ever.”

In Astoria, Constantinides was able to get solar panels on schools in his districts and upgraded state-of-the-art science labs in classrooms on the local level.

Deiseroth believes there should also be ways to help those in labor leaving fossil fuel jobs to get green union careers.

“From our prospective at Data for Progress, we tested for this and voters are supportive of a ‘Just Transition,'” said Deiseroth. “New trainings and educational opportunities for workers in those industries are a means of making sure that all of those workers who are going to be displaced have family-sustaining jobs.”

Input and apprenticeships from labor unions for the clean energy transition would be the way to go, according to Deiseroth. Advocating for high-wage jobs with the help of labor heads will be of help.

“The clean energy transition will be no small feat,” said the analyst. “It will take millions of jobs to do this — to take our country into a clean energy future.”