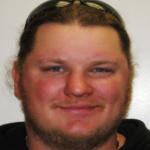 Local 46, has been doing construction work since he was 18.

From Goshen, in Orange County about 65 miles northwest of New York City, Ribitzki worked building houses and on a farm before becoming an apprentice ironworker. His grandfather and uncle were union crane operators, he says, and family friends helped connect him with Local 46.

Metallic lathers install the lattice of metal bars and cables that provide the interior framework for floors and walls, cutting, bending, positioning, and tying the rebar that reinforces the concrete that is poured over it. As an apprentice, Ribitzki has learned where rebar goes, how to read shop drawings, and shielded-metal arc welding, as well as union history. He’s also learned “post tensioning,” how to drape cables through the floor and then tighten them with a tension gun so they don’t sag.

“I chose Daniel as the Apprentice of the Year for many reasons,” says Local 46 apprentice coordinator Chip Langan. “Daniel has had excellent attendance for over four years, he has the most hours worked out of 83 fourth-year apprentices, and he loves his job!”

Most recently, Ribitzki’s been working on the massive renovation of LaGuardia Airport. “It’s great,” he says. “There’s a little bit of mayhem at the airport, but that’s how it always is.”

Married last year, he and his wife, Brittany, are expecting a baby boy in July.