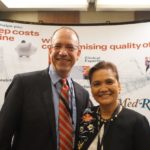 Young, its special vice president for operations. President Barack Obama’s health-insurance law, still standing despite repeated Republican attempts to repeal it this year, meant that millions more people were able to obtain health insurance, Young explains. With that “pent-up demand” came a bigger market for MedReview’s services, ferreting out fraud and ensuring that the services its clients pay for are valid and medically necessary.

“We’ve grown exponentially,” Young says. The company, founded in 1984, is now operating in all 50 states. Its clients include union health plans, the New York City government, and the New York State Department of Health, for whom it investigates complaints against nursing homes and evaluates assisted-living facilities, home-care services, and AIDS-service providers. A new client, a very large health-insurance company, “will more than double the size of our organization,” he adds.

A typical scam the company detects, Young tells LaborPress, is “upcoding”—making the patient look like they were much more gravely ill than they really were, in order to justify charging much more for a brief hospital stay. For example, a hospital might claim it admitted a patient for acute renal failure, but the medical records show it never did any testing for that condition, and “all they did was put an IV on them, give them some saline solution for a few hours, and send them home.”

“That’s not acute renal failure. That’s dehydration,” he says. “There’s about a $5,000 difference.” If a hospital could cure renal failure fast enough to send the patient home after 24 to 48 hours, he adds, they would have to be “miracle workers.”

How would it affect MedReview if the Affordable Care Act were repealed or significantly weakened? Well, says Young with a smile that appears to combine hope and pessimism, “so far, nothing has changed.”