New York, N.Y.—Housing and homelessness, transit and transparency, crime and corruption topped the 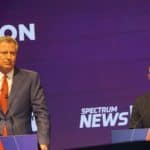 list of issues debated Aug. 23 by Mayor Bill de Blasio and former City Councilmember Sal Albanese, one of his challengers in the Sept. 12 Democratic primary.The 90-minute debate, at Symphony Space on the Upper West Side, was heavier on heat than on specific policy ideas. Albanese aimed barbed one-liners at the mayor, while de Blasio often repeated lists of his administration’s accomplishments.

Albanese accused de Blasio of contributing to worsening homelessness, and said the problem with his affordable-housing plan “is that the housing is not affordable,” as people who make $30,000 a year can’t pay rents of $1,600 a month. The mayor said homelessness was a structural problem that wouldn’t be solved overnight, and touted the two-year rent freeze voted by his appointees on the city Rent Guidelines Board, the requirement that 25% to 30% of apartments built in specially rezoned areas must be “affordable,” the law he signed last month that guarantees low-income tenants the right to a lawyer if they’re facing eviction, and “the biggest affordable-housing program in the history of the city.” He repeated the list when asked about the influence of campaign contributions from real-estate interests.

Asked if he would refuse to grant construction permits for housing that didn’t qualify as affordable, Albanese said he would. De Blasio responded that blocking luxury housing would cost thousands of construction workers their jobs, and that “leveraging” private investment is the best way to create affordable housing.

The mayor claims his housing plan will provide 200,000 affordable units within 10 years. Most of those, however, will be “preserved,” not newly built. Of the 80,000 new apartments, the number going to people who make less than $35,000 a year might be as low as 16,000. In comparison, the Mitchell-Lama program built more than 105,000 middle-income apartments between 1955 and 1978, and most of the city’s 180,000 public-housing apartments were constructed between 1945 and 1965. The de Blasio administration has also resisted requiring that developers in the program use union labor.

“The toughest thing is to see that people can earn a decent living,” former   mayor David Dinkins told LaborPress before the debate. Homelessness is a “function of the lack of affordable housing,” he added, and while rent subsidies help, “there are people who have jobs who are homeless because of inability to meet the rent.”

The two candidates also sparred over ethics and campaign financing, with Albanese calling the system “legally corrupt” and attacking de Blasio for setting up a nonprofit organization to promote his agenda and then asking people doing business with the city for donations to it. The mayor responded that the organization had helped win funding for universal pre-kindergarten and affordable housing.

Asked about black and Latino children being more likely to be put into foster care, Albanese said that the Administration for Children’s Services is “broken.” De Blasio said the agency is “working hard to improve,” with more preventive services, reduced caseloads, and better training for its social workers, including how to watch out for “implicit bias.”

“By and large, Bill de Blasio has been a great mayor for city workers,” said Juan F. Ortiz, secretary-treasurer of Social Service Employees Union Local 371, whose 18,000-odd members include ACS workers. “He doesn’t have all the money in the world, but we can work with him in an amicable way.”

Police-reform advocate Robert Gangi, who is also running in the Democratic primary, was not included in the debate because his campaign hasn’t raised enough money. Outside before the event, he told LaborPress that raising the minimum wage was the biggest labor issue facing the city—and “it shouldn’t be $15 an hour, it should be $20.” He also called for New Deal-style public-works programs to fix the subways, clean up parks, and repair public housing.

About 60 members of District Council 1707 and Retail, Wholesale, and Department Store Union Local 338 rallied around the corner, chanting de Blasio’s name. DC 1707 President Kim Medina said the union is enthusiastically backing the mayor’s re-election because of his support of universal pre-kindergarten, early childhood education, day care, and Head Start. “He understands our agenda,” she said. “He understands other programs in social services and human services.”