Markowitz Pays a Visit to MedReview

Markowitz Pays a Visit to MedReview

By Bendix Anderson
January 31, 2011
Brooklyn Borough President Marty Markowitz paid a visit to the offices of MedReview January 18 to share a lunch, give a short, Brooklyn boosting speech, and answer questions from about three dozen employees.

“Brooklyn… It’s just an unbelievable, vibrant place to live,” Markowitz said, handing out a batch of bagels dyed green to celebrate a win by the New York Jets football team.

But Markowitz also has a serious interest in health care.

He mentioned his support for the federal health care reform act now taking effect and his hopes that the U.S. will eventually create a “universal health care plan

.” He worries that budget cuts now being considered by New York State will take resources away from Medicare or hospital funds.

Markowitz has also, from time to time, supported MedReview in its pro cost containment and patient quality of care recommendations to state officials regarding the future of health care in New York, said Joseph Stamm, CEO of MedReview. 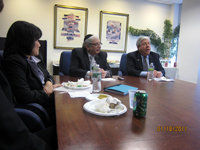 “Events like the January 18th luncheon give MedReview the opportunity to connect with leaders like Markowitz and renew the positive relationship, which is important,” said Stamm.

Markowitz also answered questions from employees about New York’s new bike lanes he’s against them and spoke about the challenges of resurgent crime, high unemployment, and persistent poverty. To help, Markowitz is focused on new developments that will create jobs, such as the latest expansion of the sound stages at Steiner Studios and the Atlantic Yards arena and towers now under construction.