Organizers at the International Association of Machinists and Aerospace Workers, District 15, have joined forces with workers at black car company Town Car International. Their goal is to “establish rules, regulations, and respect for drivers on the job,” said Khan Nasir, a union organizer and driver with the company for the past 17 years.

Town Car International workers drive some of the wealthiest people in New York, but many of its drivers report working up to 18-hour days and earning less than minimum wage after paying for leases on their cars, expenses for gas and tolls, repairs and other fees. The black car industry serves many of New York’s wealthiest corporations, including many Fortune 500 companies using a voucher system in which drivers are presented with company vouchers entitling the passenger to a ride. The drivers themselves often do not know how much money is changing hands between the company and the black car owners. This gives virtually total control to the black car managers, who decide which driver to send, whether to deduct fees or fine drivers for infractions, and ultimately how much money they make from each call.

For over a decade, drivers at Town Car International have looked to gain union representation in the face of what they describe as widespread corruption in management and mistreatment of employees. An election conducted by the National Labor Relations Board on May Day will determine whether black car drivers at Town Car International gain union representation or not.

“There is no freedom as a human being,” said Mohammed S. Moral, a Town Car International driver and union organizer. “They block our radios without notification. They don’t follow rules; there are no regulations. If they don’t like you, you are out. They tell us that the ‘door is open, and if you don’t like what we’re doing, you can get out.’”

Drivers contend with a “corrupt dispatch system” where when complaints are made about disparate treatment, no action is taken by management. Organizers state that dispatchers make it clear that in order to be sent out on good jobs, drivers must pay dispatchers money under the table. Drivers who have complained, have been suspended or laid off.

Drivers describe a climate of fear and “dictatorship” where drivers are suspended or their pay docked for small infractions. There have been many reports that Town Car International management deducts money from drivers’ paychecks without notice, and it is up to drivers to ask questions about why money is missing from their paychecks. Because many town car drivers live paycheck to paycheck, this type of action can have devastating effects for drivers and their families.

As the date of the election approaches, Town Car International has begun to distribute anti-union letters to drivers attached to their paychecks—one such message was shown to LaborPress and appears below this article.

“Whatever they say, their [management’s] word is the rule,” said Muhammad Barlas, an IAMAW District 15 organizer. “It depends on their mood, and they want everyone to shut up and take whatever abuse. They have no compassion if something goes wrong on the driver’s side, and they will just punish them when they are working 18 or even 20 hours a day.”

IAMAW District 15 organizers and drivers in favor of unionizing Town Car International drivers are expecting the company to use host of underhanded tactics to try to limit the number of yes votes cast on May 1. These tactics include sending drivers out to locations far from the election site on fake jobs so that drivers are unable to return in time to cast a ballot as well as intimidating workers by telling them that anyone who votes union will be fired.

As gas prices rise and the cost of living remains high, workers who drive for a living are feeling the crunch. IAMAW District 15 Directing Business Representative James Conigliaro holds that the May 1 election is going to serve as a bellwether in the union movement. Town Car International has developed a reputation in the industry for being hostile to union action, and IAMAW District 15 plans on gaining a win at Town Car International and then repeating the same actions at similar black car companies. “The industry is watching us,” said Conigliaro. “This is a very important election, and they’re looking to see what’s going to happen here.” 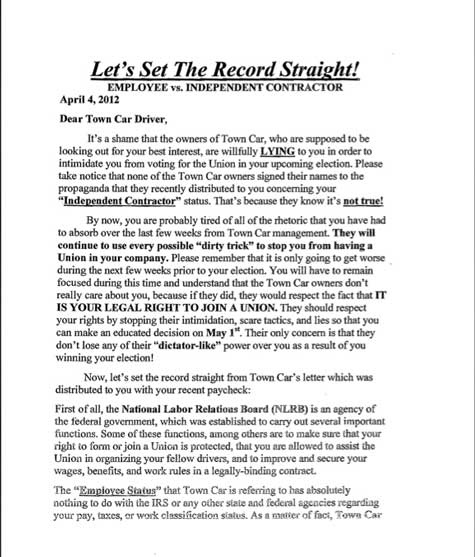 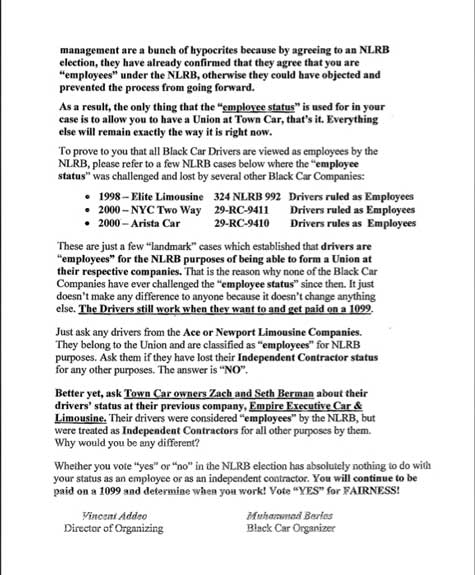 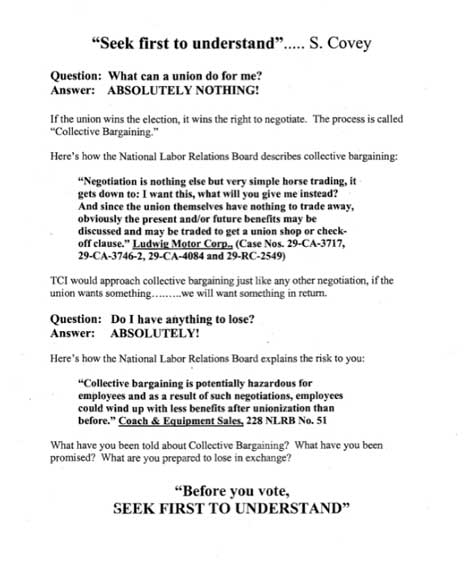