Local 375 Speaks Out Against Bloomberg Budget

New York’s Local 375, a union representing some of New York’s engineers, architects, city planners and other technical positions, held a press conference and rally last Friday at City Hall to voice their disapproval of Mayor Michael Bloomberg’s 2012 budget proposal, a document that attempts to bring the city government closer to a balanced budget through large spending cuts, no new taxes and expected increases in tax revenue and tourism.

Cuts need to be made, the administration says, in order to offset a drop in state and federal financing. Those at the rally said they were seeking a solution that puts more of the burden on the city’ s rich instead of cutting services.

Those attending included union leaders, a few city politicians, and transit and parks employees. They argued that the budget proposed would hurt ordinary New Yorkers through large cuts to social services and infrastructure projects. They also accused the Bloomberg administration of blaming public workers for the city’s economic problems.

“They [the Bloomberg administration] have made public workers the villains,” said Arthur Cheliotes, president of the CWA Local 1180, another union for city employees.

Bloomberg is seeking a 24% cut over the next four years in the city’s capital spending plan, a program responsible for infrastructure and construction projects in New York that employs approximately 50,000 construction workers. The administration argues that these cuts are necessary for the city to make ends meet.

The New York City Council argues that the administration’s numbers do not add up.

“[T]he short term economic costs of cutting the city’ s capital program now far outweigh the minimal debt service savings that would be realized… those savings could be more than outweighed by the loss of tax revenues from construction industry firms and their employees,” they said in a published response to Bloomberg’s proposal.

Those at the rally argued that cuts to the capital spending plan would negatively affect many jobs and social services on which many New Yorkers rely, and even potentially pose a safety hazard by leaving buildings and transit structures without much-needed maintenance. 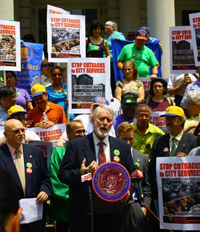 “The safety and convenience of the general public is being compromised by ignoring the timely need for repairs and upgrades of the transit system,” said Behrouz Fathi, president of the Local 375.

The City Council is still in hearings on the budget proposal – the measure should go to vote in the weeks to come.