Local 372 continues to press the Department of Education (DOE) to stop it from potentially laying off 700 Local 372 members who play a vital role in the public school system. Outside the main entrance to M.S. 571 were Local 372’s President, Santos Crespo, Jr., Council Members Letitia James and Inez Dickens, Assemblymember William Scarborough, as well as school aids, parents and fellow union members.

Crespo said the message today is, “Stop the layoffs.” He noted that although Local 372 is still negotiating with DOE, the layoff threat of the past three months has instilled a sense of urgency among the members, “who will continue to stand with parents and elected officials until DOE withdraws the layoff threats.”

As more students gathered near the school’s entrance, Baleria Johnson, a school aid administrator for 17 years and Local 372 shop steward, said that a potential layoff will harm her not only economically, but would be a blow to students who have developed bonds and depend on the aids for after-school programs. “We’re more than school aids. Students sometimes refer to me as “Mama Ann or Mama Johnson.” 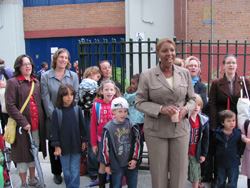 As the clock neared 8:20 am, Johnson pointed to the corner store across the street where students were congregating and said, “Part of my job is to make sure the kids aren’t late for their first class.” In addition to attending to students, the school aids are responsible for copying and faxing documents requested by teachers.

For Johnson, it’s been like sitting on pins and needles for the past three months knowing that she could be laid off any time. “All I can do is pray. I have friends who have been out of work for almost five years. I’m holding the fort as I’m helping my daughter support her daughter. If I lose my job, it’ll be tough for her.”

Anita has been a school aid since 1997 and only has six years until she retires. Her job, among many, is to make sure that the students fill out the lunch applications correctly, which she then submits electronically to a central office. She’s also praying that she can reach retirement without being terminated. “I’m a single parent who can’t afford to be laid off.”

Like a growing number of public school buildings in the city, M.S. 571 is home to three different schools, one of which is a charter school. Laura Jaffe and Rebecca Herz are parents whose children attend the public school space at M.S. 571.

They are part of a campaign to end the disparity between charter and public schools. Jaffe noted it was hard to watch new computer equipment be delivered to the building before school opened for a new semester, knowing that all of the equipment was slated only for the charter school.

Before students had to get to class, they chanted with Council Member James “Save School Aids.” “This is a bad time to be threatening to lay off school aids, who, incidentally, are predominately low-income women of color,” said James.