Local 372 Members on the Layoff Brink

This upcoming Friday is D-Day for 700 members of Local 372, who have received letters from the Department of Education (DOE) that they will be laid off. For Local 372, it’s been an agonizing past few months whilst they hoped this Friday would never come.

Just four days to go before the layoff deadline, Local 372 members and President Santos Crespo, spoke at City Hall while accompanied by elected officials and members and leaders of other unions. Santos mentioned that the union had put forth two different proposals in an attempt to work with DOE to avoid the layoff impasse, but they were summarily rejected by DOE. 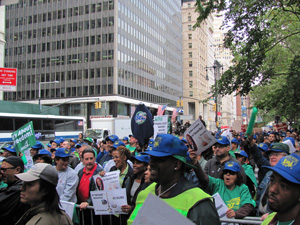 Cliftonia Johnson, a 13-year DOE employee and Local 372 member, received the dreadful letter last week and said she feels like she’s been slapped in the face. In addition, she was particularly upset that she is the only one among her union colleagues at Marte Valle High School in Manhattan to be notified of termination. “There are workers with only four months on the job who didn’t receive a layoff letter,” Johnson said.

Linda Surles, President of the Parents Association at Marte Valle, joined Johnson on the steps of city hall because “she [Johnson] is a pillar for children,” said Surles. She’s worried that if the cuts go through, the problems in the school will worsen. “Yesterday, a student was beaten badly. Without school aides, I’m worried more altercations between students will occur.”

Financial challenges or difficulties can’t be the reason DOE is pushing layoffs because, “There are currently three RFPs [requests for proposals] worth $60 million for services our members are already providing,” said Henry Garrido, Assistant Associate Director for DC 37. On top of that, “the city has hiked its budget for contract services to a whopping $4.4 billion, but its crying poverty to pay low-wage workers.” 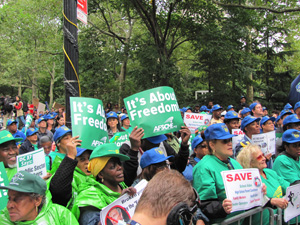 The union was also banking on a positive outcome of a meeting between Council Speaker Christine Quinn and Bloomberg, where she is reportedly negotiating with the mayor to avert the layoffs, among other things.

By the time Local 372 gathered later in the day for a rally at Barclay and Broadway, where members of the OWS joined up, Crespo said he hadn’t received word about the outcome of the meeting between the Mayor and Quinn. But, he noted, “It’s not unusual for negotiations to last until one hour before cuts take effect.”

Santos also noted it was too premature to say what recourse the union would pursue if the moratorium on the cuts isn’t approved by the City Council.