Liu “Ready for Battle” As Supporters Rally at Harlem Church

APRIL 30 — NYC Comptroller John Liu — battered by a campaign fundraising scandal — is still in the ring. A broad coalition, brought together tonight by elder statesman and lobbyist Bill Lynch, wants to see him get off the ropes, shake it off, and get back in the fight. They believe — clergy, building trades, and municipal union members who packed the gym at the Mother AME Baptist Church on 137th Street — that this energetic public servant should not be done with public life.

Many who came out were paying debts owed to Liu for his vigorous use of his statutory powers to set prevailing rate wages. Others — like RWDSU and CWA Local 1180 — came out because of Liu’s progressive stand on the living wage, where he has staked out a position to the left of Mayor Bloomberg. The many preachers who rallied the crowd had a common theme, which often rose to become a chant: “John, Keep Going!” 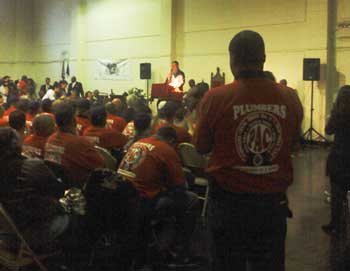 Veteran criminal defense attorney Gerald Lefcourt spoke before the preachers stepped up to the podium, offering a defense of Liu’s campaign treasurer, Jenny Hou, who was indicted last Friday for making a false statement to investigators probing campaign contributions. Lefcourt, who defended prominent dissidents including Abbie Hoffman and the Black Panthers, stepped up to the plate and looked the other team straight in the eye. “They have three full-time federal prosecutors and endless FBI agents trying to do anything they can to prove her guilty,” he said. “She will plead not guilty tomorrow morning — and she is not guilty.”

Then came clergymen, followed by the two of the few politicians willing to stand with Liu, City Councilwomen Inez Dickens and Melissa Mark Viverito, who called the Comptroller a man of the people and someone unafraid to stand up for what is right. Reverend English of the Bronx Christian Fellowship introduced the main speaker with a David and Goliath metaphor. “Don’t run from the giant,” the Reverend told the Comptroller, “because the giant could be your ticket to the next level.”

The Comptroller took the podium to deliver an assured stump speech, starting out with his claim of having saved New York $1.5 billion by recouping funds from fraudulent contracts “even as the City talks of cutting services.” He added that his office has saved an additional $600 million by refinancing debt. Then Liu segued into what he has done to increase minority contracting, warming up to his main theme: pervasive and growing inequality that must be fought by government action. Proclaiming his support for a living wage and for prevailing wage laws which the Mayor has tried to wrest from his control, Liu said “rights workers have wonhave to be protected — because that is fundamental to the American dream.”

Defending his campaign and even his team’s fundraising work — the focus of prosecutors — Liu said, “I’m prepared for this election and I’m proud of the campaign and the fundraising that has been done. He explained that he voluntarily capped campaign contributions at $800, much less than the legal maximum, to soften the power of big money.

“I’m ready to go into battle until wrongs are righted,” he said to the applauding crowd. “The number one issue is a widening wealth gap. We need to level the playing field.”

This crowd — including equal parts Harlem clergy and supportive residents, and a union contingent with two rows taken up by Plumbers Local 1, along with the UFOA, TWU Local 100, RWDSU, CWA Local 1180, DC 37 Local 2627, and others — saw the Comptroller crouch down and put his feet into the starting blocks. They clearly want him to take off down the road when the starter fires his gun.