LaborPress Honors James, Stringer, and Miller as ‘Champions of Labor’

With a wave of union-backed Democrats sweeping into city office after last month’s elections, LaborPress honored three of the biggest winners as Dec. 3: incoming Public Advocate Letitia James, Comptroller-elect Scott Stringer, and Daneek Miller, who will represent Queens’ 27th District in the City Council. More than 275 people turned out for the “Champions of Labor” event, at the New York City District Council of Carpenters headquarters in Manhattan. Watch Video of Event

James, sounding a common theme of the night, said the election represented a critical turning point. For the last 12 years, she said, “the labor movement was basically locked out of City Hall,” as a chasm grew between the city’s rich and everyone else. “We’re going to make a correction, a left turn, a pivotal turn,” she pledged.

District Council 1707 president Raglan George, who introduced her, praised James for her determination and perseverance on behalf of the city’s day-care children and workers, saying “she forced me to walk across the Brooklyn Bridge.”

Stringer thanked the labor movement effusively, saying unions’ solid support saved his campaign when he was down

20 points in the polls and being outspent 2-1 by his opponent in the Democratic primary. Last month’s election represented a “progressive wave,” he said, but trying to raise workers’ pay and house the homeless shows leadership, not impractical idealism.

“You can be progressive and run a city. It’s not mutually exclusive,” he told the crowd.” The point, he added, is to keep that coalition together after Jan. 1, when “we’re actually in City Hall making policy.”

Joseph Stamm of MedReview introduced Stringer, saying he’d been a leader on domestic-violence and affordable-housing issues during his 12 years in the Assembly, and as Manhattan Borough President had reformed the process used to appoint community-board members.

Miller said he was reluctant to run for the Council at first, because he was seeking re-election as president of Amalgamated Transit Union Local 1056. What convinced him, he said, was that “we continue to hit walls… because we don’t write policy.”

One out of every four households in his southeastern Queens district, which centers on St. Albans, Hollis, and Cambria

Outgoing Comptroller John Liu appeared to present an award to LaborPress publisher Neal Tepel, saying LaborPress is there “when the truth needs to be told with all the anti-labor rhetoric out there.” Liu, who finished fourth in the Democratic mayoral primary, said he was not going away and would be an ally to labor “on the inside or outside.”

Two Years of Covid: How the Workers’ Comp System is Responding 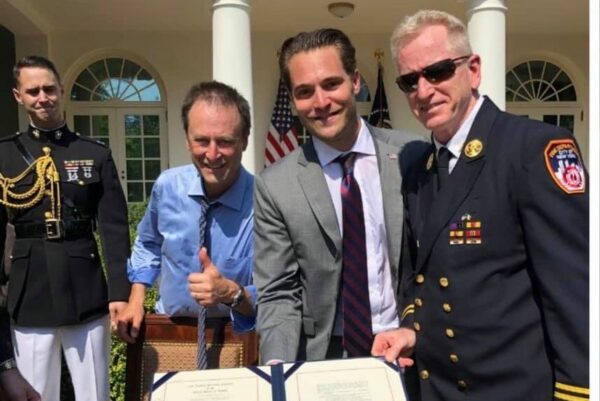