LaborPress Publisher Neal Tepel co-chaired the event with labor-side attorney Vincent Pitta. Tepel began the evening by thanking the attendees and saying about Pitta, “I don’t have to introduce Vincent Pitta. Everybody knows him. Vincent Pitta has co-hosted these events for the last ten years.”

Tepel continued by speaking about LaborPress. “LaborPress is unique. It tells the story of labor men and women and unions every day. The last decade has seen LaborPress utilize a broad spectrum of communication platforms to deliver comprehensive daily news and information for working men and women across the country. It has recently begun a new venture marketing/digital/advertising services, in alliance with Sid Paterson Advertising. Already, LaborPress reaches millions of followers each week with a special section in the New York Daily News, labor news reports on WOR/iHeart radio, social media briefs, Facebook posts, Twitter feed, digital newsletter, video broadcasts and more.” Tepel announced that as of last week, LaborPress reached two million people, plus 25,000 in labor.

New York City Council Member Ben Kallos introduced the awards presenters, but before that he introduced New York State Senator Robert Jackson, who led the crowd in a chant of “New York State is a union state!” He also congratulated the honorees. Council Member Mathieu Eugene also greeted the crowd, and thanked Tepel for his leadership, saying, “LaborPress is a public service.” Kallos said, “We need a voice when large corporations and media are trying to bust unions and LaborPress is that voice.”

Next, Kallos welcomed presenter James Shillitto, Utility Workers Union of America Local 1-2 president, who spoke of Slevin’s rise through the ranks, saying, “From the very beginning he was a hard-ass guy to deal with. A true trade unionist.” Slevin presides over a membership of just under 50,000. Slevin thanked Tepel and Pitta, saying he was “truly humbled,” but that, “It doesn’t happen with one individual…we’ve kept up the fight. The award goes to the men and women in the union.”

Next, LaMorte was introduced by Lester Crockett, Civil Service Employees Association Region Two president. He said, “I’m honored. Nicoloas LaMorte [is known] by anyone who’s been in the labor movement. He has always been the same over the years. He has big ears to listen, and a small mouth to keep it quiet when necessary.” LaMorte said that he represents 50,000 members and “I couldn’t think of anything else that I’d rather do.” He called himself a “custodian from Farmingdale,” referencing his earliest job, and said, “I accept the honor, not for me but for all of you [and] for the members. Thank you from the bottom of my heart.”

Lenny Legotte, International Union of Elevator Constructors Local One business manager saluted Gregorio. Legotte spoke of Gregorio’s rise in the elevator industry, and how important Gregorio has been, as “most contractors are multi-billion dollar corporations.”

“Mark is a great union contractor,” Legotte said. “He is a rock star. You are one of the most talented elevator guys I have ever met in my life.”

Gregorio accepted his award saying, “I am grateful to be here and for this acknowledgement. I’m just a guy who gets up and goes to work and tries to make the world better every day.”

Tepel introduced Chartrand, saying, “This is a guy who wants to make sure every one of his guys is working every day. He is 24/7.”

“I’m honored to be here with every honoree,” Chartrand said. “It’s not just members we represent. We try to bring non-union [workers] into the union. To have a guy making $10 an hour and you drop him off at the hospital when he gets hurt…and a year later [he joins the union] and says he got health care, his wife got health care…Thank you!”

“[Mark Cannizzaro] was inspired by public school teachers,” Claudio said. “I can attest to his incredible dedication and talent.”

Cannizzarro said, “When management and labor work together, great things happen…New York City is a labor town, but it is only a labor town because we make it a labor town…Thanks to the CSA team, and my lovely wife Barbara. I’m honored to represent 64,000 leaders. It is my great honor to do so. The New York City public school system could do better, but it is doing very well.”

Tepel concluded the evening by thanking Stephanie West, LaborPress’ Vice President and Director of Operations, and the unionized waiters and waitresses who worked the event. 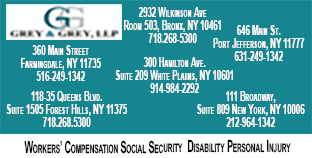