Bryan Kennedy, Wisconsin’s AFT President, was the guest speaker last week at the New York Chapter of U.S. Labor Against the War (LAW), which has labor affiliates around the country that represent 5 million union members. He told the audience that on Tuesday, November 15, the union and its allies will begin the recall process of Governor Scott Walker by trying to collect up to 750,000 signatures. Exactly 540,280 signatures are needed to initiate the recall, but the union is pursuing the higher goal to ensure there are no disputes from the state’s Government Accountability Board (GAB).

The AFT and its allies, the state’s Democratic Party and United Wisconsin, have 60 days from Tuesday to collect the signatures. But the recall doesn’t mean that Walker would be automatically removed from office. If the coalition is successful in gathering the signatures, the GAB will be required to call for a new governor’s election within 45 days.

While Kennedy and his allies pursue the recall, and possibly an election, Michael Zweig, Director, Center for Study of Working Class Life, said that U.S. LAW, working with allies nationwide, takes action to challenge or stop subsidies going towards military production and instead use the money to sustain and expand social services. 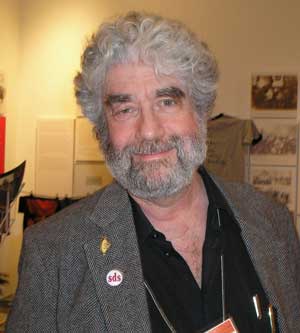 Zweig told the audience that the “militarized economy is killing the services we need.” He recognized that workers in the defense industry benefit from highly subsidized military production and would be threatened by “a shift in priorities away from military spending.” He added, “We work delicately with the unions whose members are earning good pay in the defense field.”

But, he noted, the skills and experiences that defense workers have learned could be put to better use towards alternative economic developments. He cited the work of Miriam Pemberton, Research Fellow at the Institute for Policy Studies (IPS) who wrote a report, The Green Dividend, detailing how defense workers can transfer their skills to the green energy sector, for example.

In a phone interview, Pemberton mentioned a University of Massachusetts study that found that a billion dollars spent on military production creates 11,000, while the same amount spent on clean energy manufacture creates 17,000 jobs. Although military spending has been going up over the last decade, the Pentagon’s budget is now susceptible to automatic cuts if the “Super Committee” cannot agree on how to reduce the nation’s bloated deficit.

Because the Pentagon’s budget is on the cusp of decline, it is “timely to make the transition to green sector development,” said Pemberton. She cited a facility in Massachusetts that used to employ thousands of workers producing military hardware. They are working in coalition to apply for a federal planning grant. The idea is to come up with a plan to create an alternative economic base for the community in green production. “We’re working with the union. We’d like to make contacts with other unions in other jurisdictions to work on similar plans showing that there is life after defense contracting in the emerging green economy” said Pemberton.

Pemberton noted it’s also timely to pursue green development projects because China is outpacing us. In 2010, $41 U.S. dollars went to the military for every $1 we spent on clean energy projects. In contrast, “China spends $2 to $3 for military hardware for every dollar it spends to stabilize the climate,” said Pemberton. “They’re beating us in this growing industry, because we’ve been investing mostly in military technology.”

She acknowledged that military contractors thrive on the Pentagon’s huge budget, but she also mentioned that the Pentagon wants to reduce operational energy costs by investing in clean energy. “The Pentagon spends billions in Afghanistan protecting fuel sources for its mobile equipment. It’s interested in using electric vehicles to reduce its fuel dependence to support its operations.” But the key, she said, is “getting the Pentagon to make the technology available to the rest of the country.” Pemberton said if any union is interested in working with IPS on conversion projects, they should contact her at miriam@ips-dc.org.

But the task of transitioning from vast military spending to green infrastructure projects may prove difficult because defense contractors are likely to fight hard against significant military budget cuts. In Montgomery County, Maryland earlier this year, different activist groups and a public sector union were flabbergasted when they learned that the County Council was prepared to vote on a tax waiver on a part of Lockheed Martin’s property that could potentially save the company hundreds of thousands of dollars. As a result of the pressure, however, the County Council didn’t grant the tax break.

Motivated in part by this success, a larger coalition, Fund Our Communities, Bring the War $$ Home, was formed and asked the County Council to sign and pass a resolution calling for more dollars in the federal budget dedicated to defense spending be redirected back to states and localities to prevent public sector layoffs. Early signs indicated that the County Council would pass the non-binding resolution, but it so enraged the defense industry that one company purportedly threatened to move its operations out of state. About two weeks ago, the council withdrew the resolution.