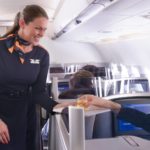 almost 2–1, according to results announced Apr. 17.

Out of the airline’s roughly 5,000 in-flight crew members, slightly more than 4,000 cast ballots during the four-week process, and 66% supported the union.

“JetBlue is an extremely profitable corporation, and now the time has arrived for these frontline workers to be appropriately compensated for their undeniable contribution in bringing JetBlue this high level of success,” TWU International President John Samuelsen said in a statement. “This historic victory is yet another example of the tide turning in America as workers collectively fight back to defend their livelihoods.”

“We are elated, ecstatic, relieved, and filled with a sense of accomplishment,” flight attendant Lyndi Wade told LaborPress via email. The margin of victory, she said, “brings some clout to the negotiating table.”

“I’m extremely proud of our work group’s accomplishment,” added Brendan Moriarty. “The tremendous support demonstrated in the vote tally shows how ready we are for positive change.”

The union will be the second one at JetBlue. Its pilots joined the Air Line Pilots Association in 2014.

Flight attendants had been trying to organize a union for almost ten years, and eventually asked the TWU for help. They began collecting signed union-authorization cards last August, and handed in more than 3,000 to the National Mediation Board, the federal agency that oversees labor issues in the airline and rail industries, in early December.

JetBlue said in a statement that while it respected the outcome of the election, it was “disappointed in this result because we believe the direct relationship is superior to third-party representation.”

“I think the union won because the direct relationship with the company no longer worked,” Wade says. “It was one-sided, and it became very apparent to most flight attendants that we did not usually benefit from the gray areas in our work rules. The company has betrayed our trust numerous times, and the $25 email was the straw that broke the camel’s back. Once you break trust, it is very hard to mend.”

Last April, news about the company offering a $25 voucher to passengers who complained about crew members using a cell phone on the plane spread rapidly among flight attendants.

Other key concerns, the TWU said, include job security, representation and due process in disciplinary cases, improved wages and benefits, and having a voice in what would happen if the airline is merged or sold.

Next on the agenda are electing a negotiating team and beginning talks for a first contract. The company statement did not pledge to reach an agreement, just saying that “once the National Mediation Board authorizes the TWU as the representative body for JetBlue in-flight crew members, both JetBlue and TWU will organize negotiating committees.” The Air Line Pilots Association, which has not yet gotten its first contract, asked for federal mediation last summer.

“It is our sincerest wish that the company comes to the table and bargains a fair and just contract,” Samuelsen said. “But if JetBlue refuses to bargain in good faith, this union is prepared to engage in a fight-back campaign that will continue until a contract is secured and the in-flight crew members are protected.”