With the deadline for filing briefs in the Janus v. AFSCME Council 31 Supreme Court case less than four 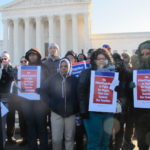 weeks away, more than 20 anti-union groups have already weighed in—including the Trump administration, which filed its brief Dec. 6. The case is a second attempt to prohibit government workers from having union shops, in which nonmembers can’t be required to join the union or contribute to its political activities, but have to pay an “agency fee” or “fair-share fee” to cover the costs of representation. Originally filed by Illinois Gov. Bruce Rauner in February 2015, it was taken up by the Liberty Justice Center and the National Right to Work Legal Defense Foundation on behalf of Mark Janus, a state Department of Family Services child-support specialist who objected to paying agency fees to American Federation of State, County and Municipal Employees Council 31, which represents more than 35,000 Illinois state workers.

The lawsuit’s basic argument is that “bargaining with the government is political speech indistinguishable from lobbying the government.” Therefore, any collective bargaining by public employees or trying to enforce a contract is inherently “political activity,” and forcing workers who aren’t union members to pay to support it violates their First Amendment rights.

That would reverse the precedent the Court set in its 1977 decision in Abood v. Detroit Board of Education, which established the “agency fee” exemption. In 2016, the Court left Abood intact, deadlocking 4-4 on a similar challenge in the Friedrichs v. California Teachers Association case. With the seat left vacant by Justice Antonin Scalia’s death now filled by Neal Gorsuch, the Court is almost certain to rule against the unions, unless Justice Anthony Kennedy, the swing vote between its liberal and right-wing blocs, has a change of heart.

The Trump administration’s brief echoes Janus’s lawyers’ arguments. “Virtually every matter at stake in a public-sector labor agreement affects the public fisc, and therefore is a matter of public policy concerning all citizens,” it says. “To compel a public employee to subsidize his union’s bargaining position on these questions is to force him to support private political and ideological viewpoints with which he may strongly disagree.” It also argues that while unions are legally required to represent nonmembers in a bargaining unit, they don’t need agency fees to do that, because there are still functioning unions in states that have outlawed the union shop.

“For more than 40 years, through Republican and Democratic administrations, the law has recognized that unions and employers have the freedom to negotiate agreements under which everybody contributes his or her fair share,” AFL-CIO President Richard Trumka responded Dec. 7. “But now the Trump Administration is urging the Supreme Court to reverse this precedent and undermine working people and our unions.”

The Janus brief is “making an incredibly broad argument about the scope of the First Amendment,” says Catherine Ruckelshaus, general counsel at the National Employment Law Project, which plans to file an amicus brief in support of AFSCME Council 31. Janus’s lawyers and the handful of workers who’ve filed amicus briefs in support of him are claiming that workers are “forced” into being in unions, she explains, but “there’s a lot of workers who feel the opposite,” as having a union helps them get better pay, benefits, and job security.

“It’s a radical legal argument, and they’re not able to back it up with facts,” she says. “All they have is assertions.”

One could easily make a First Amendment counterargument, she adds: That undermining unions violates workers’ freedom of association, their right “to join together in a strong union.”

The Janus brief’s secondary arguments include that it’s not a burden for unions to represent people who don’t pay, because they voluntarily take on exclusive representation and gain privileges from it. Another is that it’s too hard to separate “political” expenses from other union costs (Council 31’s agency fee is 78% of regular dues), and that it’s prohibitively expensive for individual nonmembers to challenge the accounting of unions that have more than 3,000 locals. It also claims that unions do not necessarily benefit workers, and that the state has more of an interest in having weak or no unions than in not having to bargain with more than one entity.

“To the extent government has any interest in dealing with a designated employee representative, it would be with a weak and submissive one,” the brief says.

More than 20 far-right groups have filed amicus briefs opposing agency fees, including the anti-union Mackinac Center for Public Policy from Michigan, the anti-regulation Competitive Enterprise Institute, the libertarian Cato Institute, and the Christian-right Rutherford Institute and American Center for Law and

Justice—whose lead counsel, Jay Sekulow, is Donald Trump’s personal lawyer. The attorney generals of 19 states, led by Bill Schuette of Michigan and including Texas, Florida, and Wisconsin, filed theirs on Dec. 5.
The Liberty Justice Center was founded in 2011 by the Illinois Policy Institute, which also advocates repealing the state’s prevailing-wage law for public construction projects. The institute is part of the State

Policy Network, which comprises more than 60 state-level policy and advocacy groups that have consistently urged restrictions on collective bargaining by public employees; Vice President Mike Pence headed its Indiana affiliate in the early ’90s. Council 31 calls it “part of a network funded by corporate billionaires to use the U.S. legal system to rig the rules against the rights of everyday working people.”

“The powerful backers in this case have made no secret about their true agenda,” AFSCME President Lee Saunders wrote in a Dec. 5 column for the AFRO-American Newspapers chain. “They have publicly said that they want to ‘defund and defang’ unions.”

Council 31 and the state of Illinois have until Jan. 12 to file their responses, and the deadline for amicus briefs in support of the union is a week later. Illinois Attorney General Lisa Madigan is going against the Rauner administration in defending agency fees.

In the 2014 Harris v. Quinn case, in which Justice Samuel Alito invited a challenge to the Abood precedent, Madigan argued that public workers having strong unions helps the government provide good-quality public services. “You want skilled workers with low turnover,” says Ruckelshaus.
The Janus case’s anti-labor intent is clear from its explanation of why “AFSCME’s negotiations with

Governor Rauner illustrate the political nature of bargaining with government.” The state, the Janus brief says, consistently indicated that “it could not afford to pay step increases or across-the-board wage increases, and was opposed to increases that were unrelated to performance.” It also wanted to cut workers’ health-insurance benefits by $700 million.

Exclusive representation may be anti-union litigators’ next target. The Janus brief implies that giving unions the exclusive right to represent public employees is also unconstitutional, on similar freedom-of-association grounds. “Nonconsenting employees are forced to pay a union for suppressing their own rights to speak for themselves,” it says. It also calls unions “hypocritical” for complaining about having to represent nonmembers, because exclusive representation bars nonmembers from negotiating their own terms.

That would be a frontal attack on one of the fundamental principles of labor unions—that workers do better bargaining collectively than individually, with “the feeble voice of one.”