Janus Case – An Attack on All Workers

Albany, NY – On Monday, the Supreme Court will hear arguments in Janus v. AFSCME, a case that could 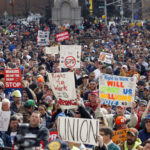 Janus is the culmination of years of attacks by the wealthy elite and corporate interests on ordinary workers. The backers of the Janus case don’t want strong unions; nor do they want workers to have a voice on the job.
The dirty little secret embedded in Janus is that this case is more than a theoretical skirmish about union dues. If the court overturns 40 years of settled law and sides with the moneyed interests behind these attacks, every single working family stands to lose out.

Here and in other states that respect the right of public-sector workers to unionize, workers generally earn higher pay, have stronger job protections, enjoy better benefits and are more likely to have a traditional pension than non-unionized workers. The union advantage is clear.

The economic benefits of unionization, however, extend well beyond those holding a union card. A 2017 Economic Policy Institute study found strong unions set a higher pay standard that non-union employers follow. In other words, the very presence of unionized workers in an industry, occupation or entire state like New York establishes norms that lift wages and benefits for all workers. That higher standard of living for all would be in jeopardy if the court rules against unions.

It’s easy to see why the corporate backers of the Janus case want to weaken unions and roll back pay and benefits for all workers. Without organized push back, the CEOs and billionaires can keep more profits for themselves. They benefit from a race to the bottom.

They don’t care about burgeoning income inequality or injustice. They like it better when workers don’t have a voice. But, they picked the wrong adversary in New York State United Teachers and our allies in labor.

At NYSUT, we are fired up about Janus. We have been knocking on members’ doors and talking to them about our voice, our values and our union. We are inspired by the strength and resolve of our members to fight for our union – and to hold on to the victories they earned through their own hard work.

The educators that we represent clearly understand the value of a union. They count on our union to ensure they are compensated fairly and treated with respect on the job, as well as in the corridors of

Albany. They count on NYSUT to defend students and public education.
That’s why they’re sticking with the union. They know that united, the union will never be defeated.