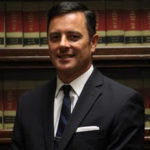 has spent his entire career litigating on behalf of labor. His involvement in the field began early on, while in his last year of law school at St. John’s, when he worked for an attorney on union and benefit plan issues. Upon graduation, he continued with the attorney for several years, until February of 1998, when he and current partner Matthew McGuire went out on their own with the goal of solely representing labor unions and ERISA (Employment Retirement Income Security Act of 1974) trust funds.

Steinberg and McGuire merged their firm with Robert Brady’s in 2003. Currently, their firm’s focus is twofold: providing traditional labor union representation of clients that are highly regarded labor organizations throughout New York City, and their affiliate ERISA plans – annuity, pension, welfare, and training plans. “We provide the full gamut of administrative and compliance representation that unions need to navigate the regulatory world of today,” says Steinberg, “due to the plethora of federal regulations from the Department of Labor and the IRS that govern the administration of not only labor unions but also their benefit plans.” “For example, on the benefit fund side, there are plan documents, trust agreements, and summary plan descriptions which are continually in need of updating to reflect the latest legal standards and rules,” he says. On the union end, “a significant portion of my practice assists clients in fulfilling the duty of fair representation they owe to their members, particularly with regards to grievances and arbitrations.” Steinberg says that over the years, “I have successfully litigated DFR cases on behalf of labor unions at the District Circuit and Federal Court levels. The focus was whether or not the union has properly evaluated and then defended a member’s grievance against an employer is the key facts of such a case.” In these cases, Steinberg is proud that he has been able to argue before and that the Second Circuit has affirmed the decisions of the lower courts. Steinberg also says that on the benefit fund side, a significant amount of litigation “is in regards to collecting contributions, where my firm has to advocate on behalf of benefit plans on an expedited basis to obtain favorable decisions that will allow us to recoup monies owed by delinquent employers.”

Steinberg’s many years in the field allow him to see clearly current challenges that pose a threat to the wellbeing of workers. “An issue we’re tracking now is the November ballot question of whether or not there should be a Constitutional Convention. It’s an important issue facing New York’s labor unions,” he says. “Those entities that are against organized labor see the path to a Constitution Convention as being similar to the right-to-work movement that has been successful in states such as Wisconsin. New York is a unique state in that its Constitution has express provisions that protect workers – for example, the 8-hour workday and the 5-day work week. The drafters of the Constitution had the foresight to put these protections in place for the working class people of this state. I think the Constitutional Convention, if convened, will be partly used to eliminate workers’ rights.” The protections have been in the Constitution since 1938, and the request for the Convention comes up every 20 years. Says Steinberg, “The Right-to Work statutes are promoting the downfall of organized labor by stripping away the right of labor unions to charge “fair share” assessments to employees who elect not to join. If the opponents of labor pass the legislation it will ultimately reduce the amount of dues collected, thus limiting the funds available to promote workers’ rights…[this legislation] could do significant damage to the working class people of the state.”

Steinberg also wants those not directly connected to labor to understand the effects a Constitutional Convention would have on them. “The cost of the Convention has been estimated to be anywhere between $50 and $100 million dollars – it will need delegates, staff, and space, and the process has a two year window.” “Every citizen will be able to vote on this,” he adds. “People who don’t think they have a vested interest in this process, should know about it and make sure their voice is heard in November.”

Tripped Up at Work or Away from the Job Site? Here’s What You Need to Prove

Remembering the Monongah Mine Catastrophe