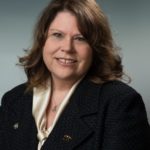 Washington, DC – Engineering News-Record (ENR) named Iron Workers (IW) General Organizer for Safety and Diversity Vicki O’Leary 2019 ENR Award of Excellence winner in recognition of her groundbreaking work through the organization’s initiatives to improve job site safety and workforce diversity and her thought leadership in the building trades. She spearheaded several IW initiatives to improve diversity and safety including “Be That One Guy,” a program to stop workplace harassment and psychological violence.

In 2017, the IW and employer-ironworker partnership IMPACT introduced a paid maternity leave program, first of its kind in the building trades. It wasn’t the end of Vicki O’Leary’s efforts to improve safety and diversity. She worked with the IW leadership to rollout the “Be That One Guy” program to fight workplace harassment that threatens safety and productivity on job sites. “It is a safety issue and it’s time to treat it as such” says O’Leary. “Workplace harassment is a dangerous distraction in our line of work. When ironworkers are distracted from their tasks full of potential hazards, it could lead to life-threatening consequences.”  The program enlists bystanders to take a stand against psychological violence, harassment and intimidation of any kind against anyone. “We want them to not be afraid to speak up and tell an aggressor to knock it off,” says Vicki.

The program is multi-faceted. Town hall meetings will be held to encourage an open forum for dialog and education. O’Leary worked to include “bystander training” and intervention best practices in key IW training programs such as new officers, apprenticeship coordinators, shop stewards and safety director training. The IW leadership believes such initiatives will not only make job sites safer, but also improve worker retention. Other building trades are following suit and beginning to introduce similar maternity leave and anti-harassment programs.

O’Leary is also the chairwoman of the North American Building Trades Unions (NABTU) Tradeswomen’s Committee. Through her leadership, NABTU’s TradesWomen Build Nations Conference has become the premier event for education and support for tradeswomen. She continues to extend IW innovation and thought leadership in safety and diversity to all building trades through her role on the NABTU committee.

The Iron Workers (IW) represents 130,000 ironworkers in North America who work in construction on bridges; structural steel; ornamental, architectural, and miscellaneous metals; rebar; and in shops. Ironworker Management Progressive Action Cooperative Trust (IMPACT) is a partnership designed to identify and expand work opportunities for ironworkers and their employers