Union members around the country took action on the National Day of Action, Thursday, March 22, to demand a fair contract from Verizon. CWA union members in the City, working without a new contract since going back to work after a two-week strike last summer, rallied in front of Verizon headquarters at 140 West Street where Chris Shelton, VP for CWA District 1, and other union and elected officials spoke.

Pete Sikora, a spokesman for CWA District 1, said the rally in the City was held to send a message to Verizon that corporate greed and destroying middle class jobs is wrong.

“The top five Verizon executives earned $283 million over the past five years. The current CEO’s, Lowell McAdam, compensation tripled to $23.1 million since he took over last summer, but meantime workers are being asked to give back benefits,” said Sikora. 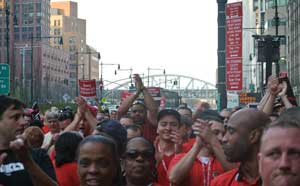 He also noted that former Verizon CEO, Ivan Seidenberg, was forced by the Federal Communications Commission to reveal that his total disclosed payout is $20 million.

Sikora stressed that Verizon has to deliver a fair contract. But so far, “the company wants to take away pensions for new hires, force active and retired workers to pay thousands of dollars for health care benefits and take away disability benefits for injured workers.”

According to Sikora, the company also wants to outsource more jobs. In New York, at least a couple thousand call center jobs have been outsourced. Although a lot of the installation and maintenance work on the company’s FiOS broadband network can’t be outsourced, nonetheless, “we catch low wage, low-benefit, non-union contractors excavating in preparation to lay fiber-optic cable.”

He added, “We’re not against these workers, but that work should be part of the bargaining unit.”

There was a moment of cheer when State Senator Daniel Squadron (D) for the 25th Senate District told the workers that Verizon’s and cable companies’ attempt to deregulate digital phone service, commonly known as “voice over Internet Protocol (VoIP), was thwarted in the State’s final budget.

Sikora noted that if the deregulation had passed, the implications wouldn’t have been good for both consumers and union members. For example, traditional land-line phone service is regulated, allowing customers to bring complaints over quality of service before the Public Service Commission. Also, some of the taxes consumers pay for their land-line service goes towards funding service for elderly and low-income persons. If VoIP deregulation proposal passed, those supports would have been scrapped.

Although the rally was specifically held to highlight the lack of a new contract with Verizon, Sikora also noted that another concern for the union is the recent proposal by Verizon to purchase spectrum (the public airwaves over which broadband data is transmitted) from a group of cable companies and the joint marketing agreements to cross sell each other’s products.

Historically fiercely competitive entities, apparently Verizon and cable want to turn the competitive pressures of the free market on their head.

Joel Kelsey, policy advisor for Free Press (a national, nonpartisan, nonprofit organization working to reform the media), who testified on Wednesday before the Senate Judiciary Committee, Subcommittee on Antitrust, Competition Policy and Consumer Rights, told LaborPress that the agreement between Verizon and the cable companies represents a threat to competition in the broadband marketplace.

The simplest way to explain the agreement is that it’s an agreement to divide the market between wireless and wireline broadband, “an agreement to stay out of each other’s way,” said Kelsey.

He explained the agreement allows Verizon to buy spectrum (a Verizon spokesman said unused spectrum) from the cable companies—Comcast, Time Warner Cable, Bright House Networks and Cox Communications—so that Verizon can prevent wireless competitors from gaining access to that spectrum and in return the cable companies will be able to offer wireless service to their subscribers without investing or building out their own wireless network.

Kelsey noted that the cable companies have said that they never intended to build out their own wireless networks because the barriers are too high. Nonetheless, cable could have entered the wireless market, and thereby sustaining competition, by partnering with Sprint, T-Mobile or Clear Wire, “who they were partnering with before the agreement,” according to Kelsey.

But that partnership would have represented a competitive threat to the two dominant carriers of AT&T and Verizon.

In addition to be able to sell wireless services, the other important benefit to cable is that they have a détente from Verizon “that they won’t have to worry about Verizon stealing their consumers in areas where Verizon FiOS exists,” Kelsey said.

“Verizon has said long before the agreement that it won’t build out FiOS anymore for the foreseeable future.”

He also noted, “If you’re really competing for market share, you wouldn’t be willing to sell to your own wireless customers your competitors’ services.”

But Rich J. Young, a spokesperson for Verizon, said that the company pursued the agreement with cable because the cable companies are not using the spectrum they own, and because there’s a looming spectrum crunch with more people using mobile devices, Verizon needs the additional spectrum.

Regarding the joint marketing agreements, Young said cable will now be able to resell wireless service while Verizon will be able to offer “quad play” (broadband Internet, television and telephone with wireless service) in areas where it doesn’t offer landline service.

“Keep in mind, FiOS is available in only 15 percent of the country. So this agreement is a way for us to offer a quad play virtually nationwide,” said Young.

He emphasized that several years ago, “we explicitly said that we’d spend $23 billion on FiOS and pass 18 million homes. We’re almost at that point. Our focus now is increasing penetration in the areas where FiOS is available.”

Young noted that by Verizon increasing the percentage of products and selling to more customers in a given area, “the more work there will be for union members. So the union’s arguments that there’ll be less work are very perplexing.”

While Kelsey regards Verizon as one of two dominant players in the market, Young said Verizon shouldn’t be referred to as a dominant player because, “although we’re increasing market share with FiOS, our penetration rate nationally is 30 percent.”

Young also said that in negotiations with the CWA, wages have yet to be discussed. Apparently, the provision of health care benefits is a big obstacle. As the union claims that the company wants its active and retirees to pay thousands of dollars towards their health care benefits, Young mentioned, “according to a report by the Kaiser Family Foundation [a leader in health policy analysis], 99.5 percent of Americans contribute in some way to health care and so we’re looking for the unions to work with us in this area.”     marc@laborpress.org