How the #CountMeIn Campaign Is Just Like Janus v. AFSCME

At first glance, one may not see strong parallels between the U.S. Supreme Court’s Janus v. 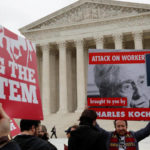 As most Commercial Observer readers know, the Supreme Court ruled that public employee unions in more than 20 states may no longer collect union dues on an automatic basis from non-member government workers within their collective bargaining jurisdiction.

And #CountMeIn is a rank-and-file Building Trades grassroots campaign that targets Related Companies and its ham-fisted, union-bashing legal tactics now in play at the $20 billion Hudson Yards development.

But Building Trades members are private-sector employees, so there’s no connection between Janus and our battle against Related, right?

Well, not really. While the impact and tactics are different, I can offer at least four parallels:

We were recently reminded of the need to support pro-labor legislators during our confrontations with high-powered developers like Related as well as their allies in the real estate community, which lobbied vigorously against common sense construction safety mandates that would help save lives. Happily, enlightened City Council members unanimously passed legislation that better ensures workplace safety, especially for those laboring under hazardous conditions.

A second parallel between Janus and #CountMeIn is simply that some of the anti-union forces are one and the same.

The Lynde and Harry Bradley Foundation—one of the right-wing institutions underwriting the Supreme Court lawsuit—for example, was identified last year by the Center for Media and Democracy as a major financial supporter of Richard Berman.

Berman is the founder of the notorious Center for Union Facts, which has been widely condemned for its recent series of outrageous and wildly misleading ads that bizarrely blamed me personally for high costs associated with subway tunnel projects.

A third parallel is the “let them eat cake” attitude of the arrogant, billionaire interests behind Janus and Related.

Big supporters of foundations bankrolling Janus are brothers David and Charles Koch, who are tied for the 12th-richest person in the world, with individual fortunes listed at $50.5 billion. Another foundation supporter is Jim Walton, the world’s 16th-richest person, whose net worth equals $40.8 billion, according to Forbes.

It’s immoral for the world’s most supremely wealthy people to undercut the wages and occupational safety of average working people.

On the West Side, the anti-union billionaire we face in the #CountMeIn campaign is Related Chairman Stephen Ross, recently reported by Forbes to be worth $7.6 billion.

Rather than deploy his wealth to elevate the aspirations of working families, he has instead chosen to file anti-union lawsuits, tolerate harassment of employees on the job and, moreover, squander $200 million or more on the self-indulgent, 150-foot-tall Vessel piece of art at Hudson Yards that Ross compares to Paris’ Eiffel Tower.

And here’s the fourth and most important parallel of all:

Union membership is indisputably one of America’s best-proven pathways to middle-class status. Whether you’re a construction worker or a government worker, anything that weakens your union representation stands as an obstacle to your hard-earned economic and social mobility.

Your name may be Koch or Walton. Or it may be Ross. But while you enjoy your billions, you are telling dedicated workers and their families that their dreams must be deferred—and that their opportunities for advancement must be denied.

Gary LaBarbera is the president of the Building & Construction Trades Council of Greater New York.

This article first appeared in the Commercial Observer.