You may be familiar with Michael Mulgrew, President of the United Federation of Teachers. But you might not know that he was once in the Carpenters Union. Soon after graduating from high school, Mulgrew stood in line all night in the rain to get a spot in a Carpenters’ apprenticeship program. He worked for years as a carpenter, going to college on nights and weekends.

That’s just some of the history revealed at the New York Labor History Association’s (NYLHA’s) Twenty-Fifth Annual John Commerford Labor Education Awards Reception, held November 29 at the UFT’s offices in Manhattan. Mulgrew and Larry Cary, a labor historian and partner with Cary Kane Law, both received the Commerford Prize in recognition of their roles as labor educators. 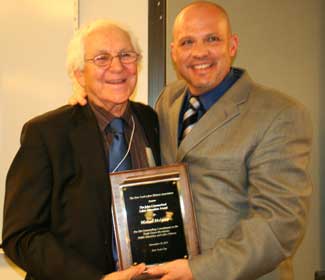 What makes Mulgrew a leading “labor educator” and not simply a labor leader for teachers? “We were impressed by his work as UFT President… he has reached out to the broader community,” said Irwin Yellowitz, President of the Association. “Many labor leaders can’t do that.” Mulgrew has emphasized the power of public protest at UFT. Even as he accepted his award, he couldn’t resist plugging the upcoming rally against voter suppression laws Dec. 10. 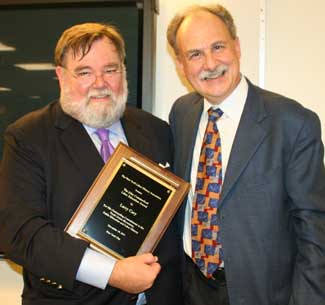 NYLHA also presented a Commerford Prize to its own former President, Larry Cary, who in the 1980s convinced then-governor Mario Cuomo to declare May “Labor History Month.” In the early days of the Robert F. Wagner Labor Archives, Cary also successfully convinced the first unions to donate their records, which is common today but very difficult then. For 24 years Professor Cary has also convinced thousands of students of the importance of labor at the Labor-Liberal Arts Program of Cornell University. “Many of whom can be found in the leadership of unions in New York City,” said Robert Wechsler, Executive Director at Lehman College and past President of NYLHA, who presented the award.

Young Harvard student Neal Meyer also won a prize for his essay that told the story of two left-wing organizers in Flint, Mich., in the 1930s. The Barbara Mayer Wertheimer Prize recognizes the best research paper written by an undergraduate college student on labor and work history. The prize comes with a $250 check. “Yours for the Revolution’: Left-wing Organizers and the Committee for Industrial Organization, 1920-1937,” studied the contribution of Rose Pesotta and Powers Hapgood to the rise of militant unionism in the 1930s. 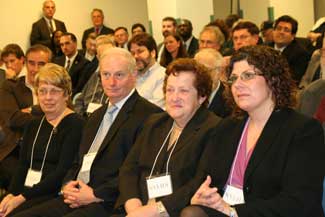