Highlights of the 2017 National AFL-CIO Convention

Convention delegates unanimously re-elected Richard Trumka of the United Mine Workers as president, 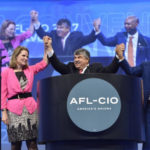 Liz Shuler of the International Brotherhood of Electrical Workers as secretary-treasurer and Tefere Gebre of United Food and Commercial Workers as executive vice president of the national AFL-CIO. Also elected were 55 vice presidents who make up the Executive Council Executive Council. All were elected to four-year terms without any opposition. Trumka and Shuler have been in their positions since 2009. Shuler is a member of Portland-based IBEW Local 125.
Over 1,200 delegates, alternates and guests gathered in St. Louis, Missouri, Oct. 22-25 for the national
AFL-CIO’s 28th Constitutional Convention. The convention is held every four years to elect officers and adopt policy resolutions.

Breaking with past practice, this time AFL-CIO declined to invite any national politicians to address the convention. That — and a resolution passed on Day 3 of the convention — were meant to communicate the need for labor to be politically independent of the two major parties.

The convention also emphasized racial equity and inclusion. That was the subject of a pre-convention day of workshops, and attendees got to witness the exclusion of Black Americans firsthand: Bruce Franks, Jr., a young Black state representative from St. Louis, was invited to speak to the pre-convention gathering Oct. 21, but was refused entry by convention center security officers, who chained the doors shut when he showed up accompanied by a large crowd of supporters carrying Black Lives Matter signs. Hearing what happened, convention-goers led by former AFL-CIO Executive Vice-President Arlene Holt-Baker marched out to join Franks and his group and escort them back inside.

St. Louis, Missouri, is where the Black Lives Matter movement began in nearby Ferguson, and the city is also on the front lines of labor’s fight for survival. Missouri’s Republican-led Legislature passed a so-called “right to work” law earlier this year, making it illegal for any union contract to require represented workers to pay dues or fees to the union. But unions collected over 300,000 signatures to refer the right-to-work law to Missouri voters, which means the law is suspended until it goes on the ballot in November 2018.

Most of the convention was taken up with discussion and passage of resolutions. Forty-two resolutions were adopted, including:

▪ Health Care For All Support legislation to guarantee health care as a human right through an improved Medicare for All.
▪ Climate Change Support comprehensive energy and climate legislation to create good jobs and address the threat of climate change; urge the United States to remain in the Paris Agreement; and support robust funding of research to bring new energy technologies to market, including renewables, carbon capture and advanced nuclear technologies.
▪ Prioritize Rehabilitation Support criminal justice reform, including efforts to reduce mandatory minimum sentencing laws, support “ban the box” laws and restore rights of the formerly incarcerated.
▪ War Is Not the Answer Promote a foreign policy based on international solidarity, bring the war dollars home and prioritize rebuilding this country’s crumbling infrastructure
▪ Immigration and Citizenship Encourage union-led programs to help immigrant members become citizens
▪ Postal Financial Services Support efforts to compel the Postal Service to provide basic financial services such as paycheck cashing and electronic funds transfer, as a step toward establishing nonprofit, public postal banking.

All the resolutions that made it to the convention floor passed on a voice vote. The only one to spark controversy was the resolution on climate change. It was a compromise forged from resolutions brought forward by Postal Workers, National Nurses United and CWA, and modified in committee for the sake of consensus. But Mark McManus, general president of United Association of Plumbers and Pipefitters, faulted the process and complained that the sponsoring unions didn’t have jobs at stake.

“Unicorns and Easter bunnies are more real than the U.S. being powered by renewables alone,” McManus said.

But others, including delegates from other building trades unions, rose to speak for the resolution, and it passed without opposing votes.

MORE: See the full text of all resolutions, and watch floor proceedings from any part of the four-day convention, at www.aflcio2017.org