The US High Speed Rail Association (USHSR) kicked off its conference on Monday, November 7, at the New Yorker Hotel where transportation heavyweights Transportation Secretary Ray LaHood and Amtrak’s Stephen Gardner spoke. The conference featured a long list of international officials and business groups eager to get a share of the inevitable build-out of High-Speed Rail (HSR) in the U.S. But noticeably absent from the panel of speakers were local city or national union representatives whose members would benefit from long-term work rebuilding the country’s rail infrastructure.

Andy Kunz, President and CEO of USHSR, said that he strongly supports labor getting more involved in supporting HSR because the large-scale projects would support good-paying jobs and strengthen the sluggish economy. 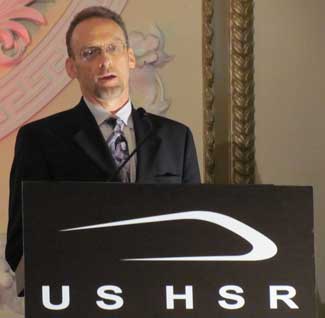 “Labor should be all over this. They should consider innovative ideas, such as investing their pension funds in HSR projects because the investments would directly create immediate work for marginally employed or unemployed union workers,” said Kunz.

He believes that labor’s fear of foreign manufacturers building locomotives for the “massive California’s HSR project” is unwarranted because foreign locomotive manufacturing represents roughly 10 percent of the total economic opportunities.

“The remaining 90 percent of the work will be constructing new bridges, tunnels and stations,” said Kunz. It remains to be seen if American steel and concrete firms get the supplies contracts for the California project.

Steve Gardner of Amtrak, who was just announced as the Vice President of NEC (Northeast Corridor) Infrastructure and Investment Development of a new business line to integrate different Amtrak business resources so as to advance the development of a 220-mph high speed rail network in the Northeast, told the audience that the scale and complexity of Amtrak’s HSR project will require multiple phases and years to build the new tunnels and realigning miles of track.

The first phase, the Master Plan, has been receiving healthy infusions of federal dollars to pay for major upgrades of track and signaling equipment and new locomotives and rail cars. Brie Sachse, Director of Public Affairs for the Federal Railroad Administration, noted in an e-mail that New York has received so far approximately $540 million for various projects. Just the Harold Interlocking Bypass project in Queens has received about $295 million to allow trains between New York and Boston avoid the interlocking, thereby reducing trip times.

These improvements and upgrades are laying the foundation for Amtrak’s Next-Gen 220-mph trains. It’ll be 2040 before the whole of the NEC is capable of supporting high-speed trains, but Gardner noted that broad sectors of the workforce would be needed to build out HSR, including operating engineers, electricians, sheet metal workers, steamfitters and carpenters.

“The employment opportunities for building Amtrak’s Next-Gen high-speed rail for the NEC are tremendous. One-hundred and sixty thousand jobs will be created during the construction phase and post-construction, generating billions in economic activity resulting from new retail businesses and real estate developments near HSR hub stations,” said Gardner.

Bob Baugh, Executive Director of the AFL-CIO Industrial Council, who was surprised that city union leaders didn’t attend the conference, said that Kunz was “being too optimistic” about the percentage of foreign manufacturers producing locomotives. “Just as federal dollars were invested to jumpstart the lithium-ion battery industry, we need to invest federal dollars to build locomotives here.”

Larry Willis, AFL-CIO’s Secretary-Treasurer, said that Amtrak should be the centerpiece of any high-speed network because under the leadership of Joseph Boardman, Amtrak’s CEO, “the rail service has demonstrated the capability to offer quality service.” Willis also said that HSR construction should “comply with prevailing wage laws and be fully compliant with Buy American provisions.”

But Transportation Secretary, Ray LaHood, told the audience that “high-speed rail is coming to America.” He added, “President Obama and Vice-President Biden are the railway men of the 21st Century.”

Latina Women Most Underpaid, Most Likely to Lose Jobs in Pandemic