Health Care Unions: Do No Harm

On January 20th, labor unions and health advocates held a press conference on the steps of City Hall and urged Senators Schumer and Gillibrand to block provisions in the Health Care Reform bill that would adversely affect New York City.

However, Liebowitz pointed out, the Senate bill would cut more than $500 million a year in funding for the Health and Hospitals Corporation (HHC).  “This provision could force the closure of municipal and voluntary hospitals and bankrupt [the city’s] healthcare system,” he added. 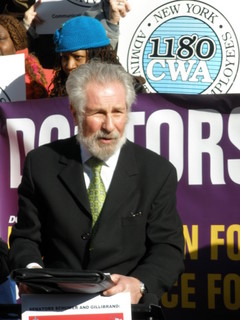 Also under the Senate bill, New York would not receive its needed share of federal funds like other states.  This would add close to $ 1 billion in State Medicaid costs and lead to a reduction in payments to hospitals, nursing homes, home health agencies and community clinics.

Dr. Luella Toni Lewis, President of the Committee of Interns and Residents SEIU, stated, “Medicaid is the safety net. Without Medicaid, families would be in crisis.”

“We cannot continue to allow medical expenses to bankrupt New York State families and businesses,” said Arthur Cheliotes, president of Communication Workers Local 1180. “Congress and the President must keep going and must finish it right.”

“It is time to put health care justice ahead of politics,” Cheliotes continued.  “The current system is not sustainable, and therefore not an option. Anyone who seeks to profit from healthcare does not understand what it means to be civilized.”