The Band’s Visit walked away with ten Tony Awards, including Best Musical, at the 72nd annual 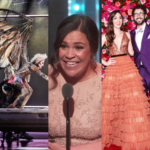 The charming and heartwarming musical uses an Egyptian band that takes a wrong bus and winds up in a small village in Israel to exemplify the themes of peace and friendship, particularly between people who may have thought of each other as enemies. Tony Shalhoub, who plays the Egyptian band’s leader, won Best Leading Actor in a musical while Katrina Lenk took Best Leading Actress in a musical and Ari’el Stachel Best Featured Actor.

Best Revival of a Play went to Angels in America, playwright two-part, Tony Kushner’s 7½-hour epic about life during the worst of the AIDS epidemic. The original production, which opened in 1993, won both a Tony and a Pulitzer Prize. Andrew Garfield also took home Best Leading Actor for his performance as Prior Walter, a gay man with AIDS whose lover deserts him, and Nathan Lane won Best Featured Actor for his role as Roy Cohn, the closeted political witch-hunter who is Angels’ villain. Angels closes July 5, so you still have an opportunity to see this stirring and engaging play and Garfield and Lane’s thrilling performances.

The surprise of the evening was that Once on This Island won Best Revival of a Musical, beating out the revivals of the much better-known My Fair Lady and Carousel.

Another two-part epic, Harry Potter and the Cursed Child, took six awards, including Best Play. The five-hour production is set 19 years in the future, after the last of seven Harry Potter novels. Replete with magic, it takes us to a time where Harry Potter is now a master wizard and the father of a child, confronting all the issues of parenthood.

Meanwhile, if you are looking for family entertainment, I highly recommend On This Island, SpongeBob Squarepants, Frozen, My Fair Lady, and Summer.