New York, N.Y.—With Columbia University refusing to bargain with the union they voted for last 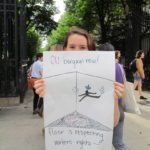 December, its graduate teaching and research assistants enlisted the support of two local Congressmembers at a forum Sept. 20.“Columbia should not be proud of the attitude they’ve taken,” Rep. Jerrold Nadler (D-Manhattan/Brooklyn) told reporters before the forum, after noting that he, his wife, and their son had all 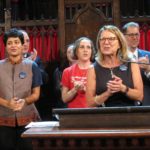 gotten degrees from the university. “I find it shameful that they are now refusing to do what the law requires.”

The university’s graduate-student workers voted 1,602-623 to be represented by Graduate Workers of Columbia-United Auto Workers Local 2110. The administration filed a petition with the National Labor Relations Board challenging the election’s validity, alleging that union representatives had intimidated voters and that ineligible voters had cast ballots. In March, the NLRB’s New York office rejected it, stating that Columbia had not proved that there was anywhere near enough “objectionable conduct” to have affected the results—for example, that it hadn’t presented evidence that more than four of the voters were ineligible. The administration has appealed that decision to the national NLRB. 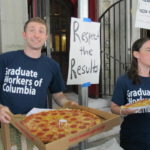 the more than 150 people at the forum, at a church across Broadway from the Morningside Heights campus. He accused the Columbia administration of “absolute, complete, and total hypocrisy.”

Noura Farra, a Lebanese doctoral student in computer science, said she found the university’s refusal to accept the election results ironic after it campaigned so hard against the union. “They put all that effort into convincing us to vote no,” she said, “as if they believed our vote actually mattered.”

The administration did not respond to questions its press office asked LaborPress to email. 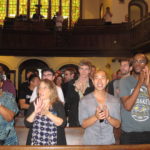 employees with the right to collective bargaining, reversing a Bush-era ruling that they were primarily students. Six universities, including the New School, have recognized graduate-worker unions since then, Local 2110 members say, but Columbia and Yale have refused to, and the University of Chicago is trying to get the NLRB to cancel a vote on representation scheduled Oct. 17-18.

Graduate assistants at the University of Michigan, Rep. Grace Meng (D-Queens) said, have had a union contract since 1975.

Graduate assistants say the issues they want a union for include sexual harassment—a Yale University survey found 54% of its female graduate students have experienced it, said Robin Canavan, cochair of UNITE HERE Local 33’s “microunit” there—unstable health care, getting paid months late, and a lack of job security, especially for the 40% who are international students. Olga Brudastova, a Ph.D. student and researcher in civil engineering from Russia, spoke of a Chinese teaching assistant who had to drop out after he was fired for going home for spring break. With a union contract, she said, he couldn’t have been fired without just cause.

Working conditions are also an issue. Research assistant Justin Steinfeld said that the heating and air-cooling system blows black dust into the laboratories where they’re doing cancer research, and the building’s tap water is so contaminated they can’t use it for experiments. He held up a flask of murky,  off-color H20 to demonstrate that.

Columbia’s refusal to accept the vote could be simply stalling. “Since we’re not certified, they don’t have to bargain with us,” Brudastova told LaborPress. “It’s convenient for them to have all these tools to stall the negotiations.” The administration might also be hoping that the national NLRB, which now has a 3-2 Republican majority, will reverse the 2016 decision that graduate assistants at private universities have the right to collective bargaining.

“Even if they do,” says UAW Region 9A President Julie Kushner, “that’s not going to stop this movement.”