Firefighter Pays it Forward With Huge Donation to 9/11 Survivors 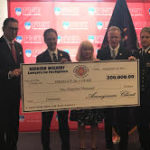 $200,000 in monies he was awarded as a result of his work at Ground Zero to the FDNY’s Fired Up for a Cure Foundation, which supports the families of New York City firefighters battling life-threatening illness. The firefighter, who was diagnosed with kidney cancer in 2014, and is currently in remission, participated for weeks in the rescue and recovery operations at the World Trade Center site, recovering body parts, to help give peace to the families of the victims, and paid a steep price. But instead of accepting his award once his illness was WTC-certified, he told Michael Barasch, of Barasch, McGarry,  PC, who handled his case, that he didn’t want the money. The firm, which represents injured firefighters, first responders and local residents made sick as a result of exposure to the toxic dust, has handled over 10,000 cases, but this was a first.

“When we called him up to tell him we had his certification award, he said, ‘I don’t want it – give it to someone else.’ We recommended he give it to Fired Up,” said Barasch. The Fired Up for a Cure Foundation serves as a critical resource to sick FDNY firefighters, both current and retired, as they undergo treatment for cancer and other diseases contracted as a result of working on the rescue and recovery efforts at the World Trade Center. T 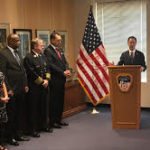 he foundation primarily benefits the FDNY Fire Family Transport Foundation and the American Cancer Society. In this case, the donation will pay for a van that will take people to their chemotherapy, as well as for a driver, sparing the patients’ families long drives and lengthy difficult waits. “My dad said, if you see a blind man selling pencils for one dollar, the definition of charity is you give one dollar and don’t take a pencil,” said Barasch. “This guy wanted no recognition at all for what he did.”

In addition to buying the transport van, the donation also will support families by providing for early detection, hospice care, outreach to train people in education about crucial health choices – such as going for skin cancer check-ups, which is curable and preventable, and colonoscopies. “These are all so important – especially for firefighters, who feel like they’re bulletproof,” said Barasch. 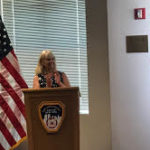 igro and FDNY Chief Medical Officer Dr. Kerry Kelly. At the ceremony, Barasch was also joined by Chief of Department James Leonard and other FDNY Chiefs and medical office officials.

“Every single member of the FDNY has been impacted by cancer,” Commissioner Nigro told the crowd. “Either you, a loved one or a colleague has fought this disease in one way or another. This ceremony here today is all about one thing: generosity.” “I can’t help but thank the person who made this donation,” said Chief Leonard.