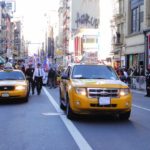 insurmountable financial devastation.  We send our deepest condolences to the family of Nicanor Ochisor. Nicanor was an immigrant worker and a yellow taxi medallion owner/driver, who drove with his wife, an increasing pattern among drivers’ families working around the clock without time to rest or recuperate with loved ones, adding to the crushing devastation of poverty. Nicanor lost his life savings and was pushed to financial ruin when New York City broke its promise to professional drivers.

Instead of keeping its commitment to yellow cab drivers, who operate in the heavily-regulated medallion industry, the city allowed Uber, Lyft, and their cohorts to flood our streets with vehicles covered by zero regulation. This anti-regulation zealotry came at the expense of professional drivers. Black car, yellow cab, green car and even Uber drivers themselves have been pushed into poverty as drivers see their incomes plummet, competing for fares in streets swamped by least 100,000 for-hire vehicles and with no relief in sight.

Last month, a veteran black car driver, Doug Schifter, shot himself in front of City Hall after facing financial ruin. Two livery drivers killed themselves in the previous months, one of whom, Danilo Castillo, wrote his suicide note on the back of a Taxi and Limousine Commission summons.

We are calling on the Mayor and on the City Council to hold an emergency session to intervene in this growing crisis.

We must stop treating the devastation of people’s lives as inevitable. Our city has the power to act. And we demand that they act now by capping the number of vehicles on our streets and by making the regulated yellow and green cab fare the minimum fare for all for-hire vehicles.

We cannot allow Uber to continue to destroy lives for a business model that hasn’t even been proven sustainable. We must come together now and demand protections for ALL drivers and for rational regulations that level the playing field.