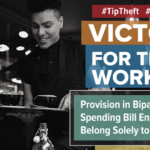 Saru Jayaraman, co-founder and president of Restaurant Opportunities Centers (ROC) United, said, “This legislation represents a historic victory for restaurant workers. The National Restaurant Association wanted to steal workers’ tips, but the workers said no—and they won. The fact that hundreds of thousands of workers stood up and said no to employers taking their tips, and that Congressional leadership listened and acted, is a testament to the power of workers standing up together.”

In December 2017, the Trump Department of Labor, aligning itself with the National Restaurant Association, proposed a rule allowing employers to keep their workers’ tips when they are paid as little as the minimum wage. That proposal sparked a massive public outcry, and workers and their allies around the country mobilized. Around 350,000 restaurant workers submitted public comments, testified on Capitol Hill, and participated in multiple actions in front of U.S. Labor Department buildings in 20 cities nationwide. The message was clear, “Trump, Don’t Steal Our Tips!”

Christine Owens, executive director of the National Employment Law Project, said, “The law cannot be more clear: Tips belong to workers and no one else. This landmark victory belongs to all the restaurant servers, bartenders, car wash workers, valets, attendants, and all the other tipped workers in America who fought back when the Trump administration proposed its misguided tip-stealing rule. They wrote in, held protests, signed petitions, and spoke out. That’s what brought Labor Department officials and lawmakers to the table to hash out this historic agreement. And we also extend our deepest thanks to Sen. Patty Murray for skillfully negotiating this agreement, and to Sen. Chuck Schumer and House Minority Leader Nancy Pelosi for getting it across the finish line.”

Saru Jayaraman of ROC United concluded, “We thank all of our allies in Congress and in the field, who stood with the courageous restaurant workers on this issue. Protecting workers’ tips from managerial tip theft would also protect a mostly-female workforce from exacerbated sexual harassment. The next step is that we need One Fair Wage—the elimination of the lower wage for tipped workers so that this incredibly large workforce, the majority of whom are women, is not entirely dependent on customer tips to feed their families. When this omnibus bill passes, it will represent an enormous step toward that final victory.”