Washington—The Teamsters and other U.S. unions are sending hundreds of volunteers to Puerto Rico to 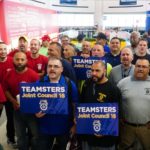 help with hurricane-relief efforts, but that hasn’t stopped far-right conspiracy-theory sites from claiming that union truckers are sabotaging the island’s recovery by refusing to work.“The truth is that members from Teamsters Local Union 901 in San Juan have been working or volunteering since the day after the hurricane passed, helping with disaster relief and recovery,” the Teamsters said in a statement released Oct. 2. “Anyone that has reported anything different is lying,” said Local 901 Secretary-Treasurer Alexis Rodriguez.”

The stories had appeared over the previous weekend on sites including Alex Jones’ Infowars, 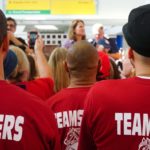 GatewayPundit, ConservativeTreeHouse, and FreeRepublic. “There is no question that drivers were ordered NOT TO TOUCH THE TRUCKS as a retaliatory measure against the Governor of Puerto Rico,” ConservativeTreeHouse posted Sept. 30. “The Mayor of San Juan, Carmen Yulin, decided to keep her mouth shut about the strike and insult President Trump instead.”

The story quoted Colonel Michael A. Valle, commander of the Hurricane Maria relief effort, telling the Huffington Post, “Trucks we have. There are ships full of supplies, backed up in the ports, waiting to have a vehicle to unload into. However, only 20% of the truck drivers show up to work.” 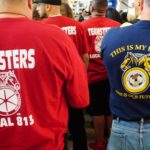 The urban-legend-debunking site Snopes.com flagged that claim as “FALSE.” Col. Valle, it noted, had also told the Huffington Post, “There should be zero blame on the drivers. They can’t get to work, the infrastructure is destroyed, they can’t get fuel themselves, and they can’t call us for help because there’s no communication.”

Frente Amplio, an independent union not affiliated with the Teamsters, had actually called off a planned strike in August, three weeks before Hurricane Irma hit.

“The truckers are doing what they need to do. The one not doing what he needs to do is the governor,” Rodriguez told Wapa-TV. “The truckers are going to work, and I expect truck drivers in the country to keep working with the people, who made it possible for us to use the roads.”

On Oct. 1, Infowars posted a story tagged “BOMBSHELL: Democrats and Puerto Rican Teamsters have orchestrated a stand-down of essential supply distribution throughout Puerto Rico in an effort to make President Trump appear ineffective at responding to the humanitarian crisis.” It said Democrats “appear to have been preparing for it as well, evidenced by last night’s polished Saturday Night Live sketches hammering Trump on Puerto Rico.”

Infowars was also claiming that the Las Vegas mass shooting Oct. 1 was a “false-flag event” attacking “patriotic, God-fearing Americans” in order to “increase the Shadow Government’s surveillance state, specifically inside the United States.” It noted that “the mainstream media was already in Las Vegas to cover the O.J. Simpson release right before the shooting occurred.”

“These viral stories spreading across the Internet are nothing but lies perpetrated by anti-union entities to further their destructive agenda,” Teamsters General President Jim Hoffa said in the Oct. 2 statement. “The fact that they are attempting to capitalize on the suffering of millions of citizens in Puerto Rico that are dire need of our help by pushing these false stories, just exposes their true nature.”

Teamsters Joint Council 16 and its affiliate Local 901, which has more than 2,000 members in Puerto Rico, have been working “to identify and select volunteers with the proper skill sets needed.” “There is currently a need for volunteer truck drivers who hold a Commercial Driver’s License (CDL) to transport shipping containers from the port to distribution centers throughout the island,” the Teamsters said Sept. 29. “At this time, it is unclear if there are trucks available to move the containers, fuel to operate the trucks, or road access to the distribution centers.”

On Oct. 4, more than 200 union members flew from Newark, N.J. to San Juan as volunteers for the relief effort. The flight was donated by United Airlines and coordinated by the AFL-CIO. The 79 Teamsters on board, the union said, were truck drivers who will primarily be utilized in supply delivery and sanitation support. Twelve more Teamsters were coming from Kentucky on a separate flight, it added, and 30 sanitation workers from New York’s Local 831 were already on the ground.

PrevA Clockwork Orange: Haunting and Violent, Not for the Faint of Heart
ILA Members in Port of New York and New Jersey Fill Two Containers Of Donated Generators, Clothing, Water and Food To Send To Their Fellow ILA Members in Hurricane Ravaged Puerto RicoNext