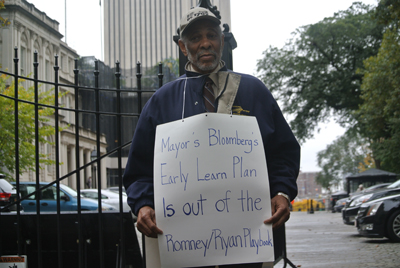 Executive Director of District Council 1707, Raglan George, Jr., demonstrated again in front of City Hall to protest Mayor Michael Bloomberg’s EarlyLearn system, which went into effect on October 1. The city is billing EarlyLearn as the most innovative change to the city’s early education system in nearly 50 years, but George said that EarlyLearn is a union-busting scheme that is causing severe disruption and distress among children, parents and rank-and-filers as numerous centers that were not recipients of EarlyLearn awards close their doors.

George noted that the city’s comprehensive child care and early education system has been the envy of the nation, with many states wishing to replicate the city’s success. But the city will no longer be the model it once was because of EarlyLearn.

“The Administration for Children’s Services and the Mayor isn’t talking, but they know it’s a flawed system that won’t work,” said George. 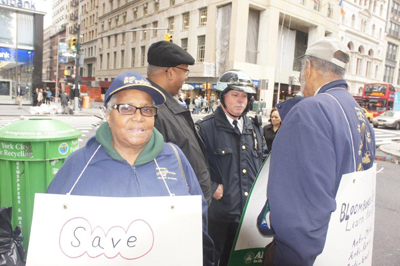 Mabel Everett, President of Local 205 Day Care Employees, greeted George as he marched. She’s been in the day care industry for nearly 40 years, but recently retired because the day care center she formerly worked for fired her just days before EarlyLearn took effect. She expressed frustration and dismay over the new system.

“EarlyLearn is diminishing standards. Day care workers had to complete a Masters in Education to become a Group Teacher, but now they only need a Bachelor’s. And whereas three teachers used to help the children in the classroom, aides are now being let go,” said Everett.

Ingrid was a group teacher with a day care center that was acquired by All My Children Day Care and Nursery School in Brooklyn, but has been unemployed since the onset of EarlyLearn. She had to interview for the job she’s been doing for 19 years, only to be told that she didn’t get the job. 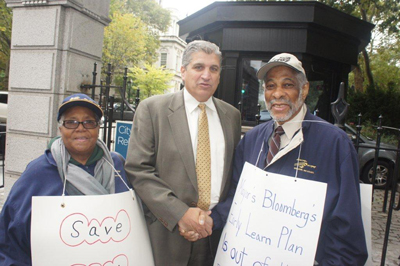 And Miguel, a bookkeeper and 30-year veteran in the day care industry, had his hours reduced from eight to four per day. He offered to work six hours per day, but the center’s director refused. For the first time in his 30-year career in the industry, he was laid off last Friday.