New York, NY—The labor writer Rich Yeselson stirred the pot back in the summer when he penned the article, Fortress Unionism, for the journal Democracy. He argued that unions should tap into workers’ anger to fuel huge growth in the private sector. Former SEIU officials, Andy Stern and Bruce Raynor, rebutted that unions have to rethink their business model in order to represent many more workers. Watch Video of Debate

The debate that Yeselson sparked in Democracy continued on Monday night at the Sidney Hillman Foundation where Messrs. Yeselson, Raynor and Stern, joined by Saripta Gupta of Jobs with Justice, elaborated on their ideas of how the union movement can regain their once formidable strength without living in the past.

Yeselson acknowledged he was being a deliberate provocateur when he wrote the piece in order to spark a discussion about the issue of rebuilding organized labor’s strength; he argued that organized labor has to stop wasting resources on comprehensive campaigns that might not yield many more new workers gaining union representation.

Instead, he explained that Fortress Unionism is about defending unions’ strength in certain regions in the country and sectors of the economy such as the big cities and the auto, supermarket, building services and telecom industries. He believes labor should keep the fortress open to the coalitions it has been building with community organizations and progressive forces.

He cited the author Irving Berstein’s book, The Turbulent Years, to show an example of how workers’ anger and action in the 1930s led to the passage of the National Labor Relations Act and how that anger can be utilized today to rebuild organized labor’s strength.

Yeselson quoted a tugboat operator in New York during a strike in the 1930s that was apparently overheard by a reporter telling his boss that if the owner didn’t end the strike soon the tugboat operator would hurt him because he couldn’t eat.

“To get huge growth, you need probably a few hundred thousand people like that to start and then it’ll spread to their brothers and sisters,” said Yeselson.

But Raynor and Stern said one big mistake that the labor movement keeps making is waiting for external forces to save it, and that organized labor has to start doing things differently. In Raynor’s view, that means labor needs to be a voice for all working people, not just for its members. In Stern’s view, the only way that organized labor is going to be able to organize millions of new workers, at a time when private sector union representation is now about 7 or 8 percent out of a workforce of 140 million, is that it has to think of new ways of gaining new resources other than through collective bargaining.

He believes that unions can leverage the assets it already possesses to raise money that’ll be necessary to organize.

“We have defined benefit pension plans that we could offer to non-union employers or employees, we have 401ks whose fees are far lower than people can get on their own, we have apprentice and training programs that people can buy directly from the union,” said Stern.

But the problem right now, according to Stern, is that it is illegal for unions to do that.

But without it, Stern believes the union movement will be like a Blockbuster in a Netflix world that isn’t self-sustaining.

“When Steve Jobs was down to his last Apple computer, he bet all his money on a new Apple company that didn’t exist. We need to use our money to bet on a model that doesn’t yet exist, of a labor movement that represents all workers and raises resources other than through collective bargaining,” Stern said.

We Still Need a Good Plan for Reopening Post-COVID 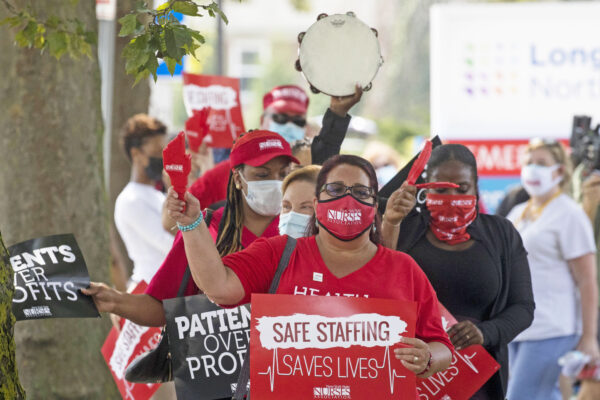 NYSNA Executive Director: ‘We Finally Have the Pathway’ to lifesaving Staffing Ratios