July 28, 2011
By Bendix Anderson
In a season of sharp budget cuts, when even teachers and firefighters face proposed layoffs, Bill deBlasio has a different prescription for the City budget and its ailing economy. DeBlasio, the Public Advocate for New York City, recently fought against a plan to fire 6,000 teachers, close 20 firehouses and shut down scores of daycare centers.

New York City should not weaken itself with another round of layoffs, says deBlasio. Instead, the City should invest in its own economy recovery. “We have to use all the tools we have… and in this City, we have a lot of tools,” said deBlasio in a morning presentation at MedReview, Inc., a health utilization review organization based in Manhattan. 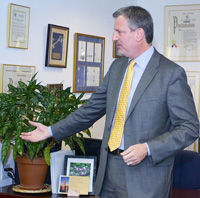 deBlasio advocates leveraging the City’s resources to bring new jobs here. For example, the City recently signed a $1 billion dollar deal to create the next generation of taxicabs. Why not require the winning bidder for large deals like these to bring at least some jobs to the City? The City could have at least required new taxis be maintained in the Five Boroughs.

The City also has more than $1 billion in pension investments. Why not require some of those moneys to be invested within City limits?

deBlasio shared these ideas and discussed ongoing concerns about rising health-care costs and other health-care related concerns at MedReview’s headquarters in downtown Manhattan, overlooking the Brooklyn Bridge. Afterward, he answered questions from MedReview staff, clients and guests over breakfast and coffee. deBlasio has had a long friendship with MedReview. In 2008, when there was consideration of weakening the review of health utilization, which helps to control health care costs, deBlasio worked to keep the process in place. He was a City Council member at the time.

“I always know that I can count on Bill to give MedReview a full hearing on the issues and to act appropriately. He has always been there for us,” said MedReview CEO Joseph Stamm.