October 21, 2011—The Occupy Wall Street (OWS) movement has entered its first month of protest and CWA members have worked for Verizon without a contract since going back to work on August 22. In another instance of a growing collaboration of OWS and the city’s labor movement, both joined forces today in the “March Against Verizon Corporate Greed” event to protest against economic injustices.

CWA members, joined by other union organizations, such as DC 37, UAW Region 9A, Teamsters and Professional Staff Congress, picketed in front of Verizon’s headquarters on West Street before marching down to the epicenter of the city’s financial district.

According to Bob Masters, CWA District 1 Legislative and Political Director, the possibility to strike remains very real as the union and the company has yet to reach agreement on a number of issues, such as pensions, health care and outsourcing. 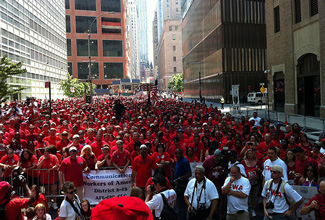 John Bonomo, Director of Verizon Media Relations, noted in an e-mail exchange that one of the sticking points in the current negotiations is “getting our Verizon [East Coast] employees to contribute to their monthly health care premiums, which the other 135,000 Verizon [Wireless] employees already do.”

But Masters and Pete Sikora, CWA District 1 Research Economist, contend that if Verizon Wireless is so much more profitable than Verizon’s traditional land-line business, as the company claims, then why the company doesn’t pay more or all of its wireless workers’ health care? “Rather than it taking its profits and putting it towards wireless workers’ health plans, Verizon wants to instead lower everybody’s financial bottom-line, “said Sikora.

CWA also claimed in a press release that “the company reaped a $1.3 billion federal corporate income tax rebate.” In turn, Verizon countered, in a statement to the AFL-CIO’s President Richard Trumka, that “in 2010, Verizon’s federal tax liability….was more than $2.2 billion….and a total of more than $7.5 billion in over the past five years.”

In the same statement, Verizon emphasizes that it “has invested $33.3 billion in infrastructure in 2009 and 2010 alone,” which is the basis for sustaining “thousands of upper-middle class, union represented jobs.”

For some members of CWA 1101, the last two months has been very trying and stressful. Mike Neggie, who works in Yonkers as a field technician, said that managers at his depot have been giving workers a difficult time. “Unless we put in for vacation time at the beginning of the year, management will only grant us personal days if we want to spontaneously go away for a week.” He believes the manager’s callous behavior is directly related to the animosity that exists between the company and union as a result of the tense negotiations.

Neggie wishes the union was still on strike because the workers would have had leverage to negotiate during Hurricane Irene. “I wish we were on strike so that I could join OWS, which is really helping to wake up the labor movement,” he said.

Andrew Poueymirou and Vinny Biondolillo, both field technicians out of the Nevins Street depot in Brooklyn are also concerned by some of the company’s demands. They both noted that the company wants to eliminate the restrictions for transferring workers to other parts of the region. Currently, Verizon can transfer field technicians to another depot within a 35-mile radius.

“I have two kids enrolled in school in Brooklyn. I don’t want to end up transferring my entire family to Albany or somewhere else if the restriction is eliminated,” said Biondolillo. Poueymirou and Biondolillo are particularly concerned by the company’s seemingly hard stance on concessions. A 15-year veteran with Verizon, Poueymirou said previous labor and management conflicts ended within a relatively short time. “But now the company doesn’t seem to want to budge, and there was rumor that Lowell McAdams’ [Verizon’s CEO] intention is to bust the union.”

Poueymirou and Biondolillo are grateful to OWS for also waking up the labor movement, but they also believe that the movement’s lack of a unified message is limiting. “There are so many different voices, with one group arguing against fracking upstate and others denouncing animal cruelty. I think the movement and its message would be strengthened by clearly defined economic demands.”

But Steve, a website developer from Brooklyn, who joined CWA in the march and has been a full-time resident at Zuccotti Park for the past three weeks, said that OWS explicitly eschews demands.

He said that OWS and CWA’s commonality are the protestations against “economic injustices committed by the collusion between the government and corporations.” When asked can the government be a driving force in altering the economy to benefit the 99 percent even though President Obama can’t get his jobs bill passed, Steve said, “I have high hopes the people will be fairly represented.”