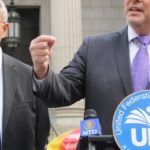 certification standards for teachers when a New York State Supreme Court justice on June 19 struck down less stringent regulations established last October by the State University of New York. The union victory was a setback for the charter school lobby, which had pushed for the new rules.

“Today the children of New York State won,” said UFT President Michael Mulgrew. “We are gratified that the court found in favor of strict certification requirements for all teachers. It is not easy to become a fully certified teacher in New York, nor should it be.”

Under current rules, bachelor’s and master’s degrees from state-approved colleges and universities are mandatory for fully certified teachers at traditional public schools. Those teachers must also pass state-certification and content-area exams. Each teacher must complete an extensive period of supervised student teaching, and working teachers are expected to regularly update their skills.

The new rules approved by SUNY’s Charter Schools Committee, one of two entities that grant charters in the state, would have allowed some charter schools, including Success Academy charter schools, to create their own in-house certification programs that would eliminate or water down these requirements. To attain certification, teachers in SUNY-authorized charter schools would only need 160 hours of instruction in teaching skills, 40 hours of practice instruction and one certification exam. The committee eliminated the requirement that teachers eventually have a master’s degree. In fact, the lawsuit charged that the new regulations “do not require a candidate to have completed a bachelor’s degree.”

The lawsuits, filed by the UFT, NYSUT and the State Education Department, contended that the state education commissioner and the Board of Regents — not the SUNY charter committee — have final say over teacher certification programs, and that the new certification programs fell below the minimum state requirements, making them illegal.

Board of Regents Chancellor Betty A. Rosa and State Education Commissioner MaryEllen Elia, who had called the new rules “an insult to the teaching profession,” issued a joint statement applauding the ruling. “Every child — regardless of color, economic status or ability — deserves a qualified teacher with meaningful experience to be prepared for the classroom,” they said.

Charter schools, which already are permitted to have a limited number of uncertified teachers, often have high teacher turnover as their staff — which tends to be young and inexperienced — burns out under the pressure of the arduous working conditions common in nonunionized workplaces. The State Education Department’s most recent data put charters’ turnover rate at nearly 40 percent, compared to 14 percent for public schools.

The high turnover rate at some charter schools made it difficult for them to maintain the required percentage of fully certified teachers. The charter lobby had hoped lower standards would make it easier to replace teachers who leave.

Success Academy, the charter sector’s largest school network, had finalized its in-house teacher certification program in May. It will now have to revise its plans to comply with the court ruling.