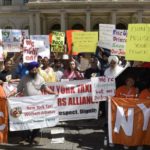 Council passed a five-bill package Aug. 8 that will limit new licenses for cabs to wheelchair-accessible vehicles for the next year.

The Council approved the bill, sponsored by Stephen Levin (D-Brooklyn) by a 39-6 vote. The freeze on licenses is intended to give the city Taxi and Limousine Commission time to complete a study on how to regulate app-based cabs.

The number of app-based cabs from services such as Uber and Lyft has risen from less than 15,000 in 2015, when Mayor Bill de Blasio unsuccessfully tried to pass legislation limiting their numbers, to 80,000 today, Councilmember Brad Lander (D-Brooklyn) said in a statement. The intensified competition for fares has decimated drivers’ incomes. Lander said 85% of app-based drivers make less than $15 an hour, and they are driving around without a fare close to half the time. Since November, six drivers in extreme financial distress have committed suicide.

The mayor said he looked forward to signing the bill, as the “unchecked growth of app-based for-hire vehicle companies” was “driving working New Yorkers into poverty and our streets into gridlock.”

“This victory belongs to our brothers and sisters who pulled over to the side of the road to call City Councilmembers during their grueling 14-hour shifts,”New York Taxi Workers Alliance executive director Bhairavi Desai said in a statement after the vote. “It set a precedent for the entire world, as app companies like Uber and Lyft use technological innovation to return us to a time of sweated labor, destroying lives and livelihoods across the planet.”

The other four bills were passed unanimously. One, sponsored by Ruben Diaz Sr. (D-Bronx), would create new licensing mandates for “high-volume for-hire transportation companies” that do more than 10,000 trips a day. Another, sponsored by Lander, would require the TLC to set minimum payments for drivers at those companies. The other two would waive the license fee for wheelchair-accessible vehicles and lower fines for drivers who pick up people who hail them in unauthorized places.

“More than 65,000 working families will be getting a desperately needed raise because of today’s vote,” said Jim Conigliaro, Jr., founder of the Independent Drivers Guild, an association of app-based drivers. “We cannot allow the so-called ‘gig economy’ companies to exploit loopholes in the law in order to strip workers of their rights and protections.” The IDG lobbied hard for the Lander bill, but opposed the idea of a cap on for-hire vehicles until last month.

The Amalgamated Transit Union, the third union trying to organize New York’s app-based drivers, praised the one-year cap as “an important first step in the fight for justice for rideshare drivers.”

Uber and Lyft both argued that the cap would lead to longer waiting times and higher fares, especially outside central Manhattan. Lyft sent users a message saying that it could have “at least 25% fewer drivers on the road” if the measure passed. “These sweeping cuts to transportation will bring New Yorkers back to an era of struggling to get a ride, particularly for communities of color and in the outer boroughs,” Joseph Okpaku, the company’s vice president of policy, said in a statement.

Councilmember Levin countered that the rising number of for-hire vehicles is already snarling traffic and lowering drivers’ wages. “Doing nothing or endlessly waiting for others to act is not a feasible option,” he said. “This bill is a measured response.”

The Council is preparing another package of bills to address other needs, NYTWA said, including establishing a health and benefits fund for drivers in all sectors of the industry; limits on leasing expenses for for-hire vehicles, “to stop predatory lending”; and financial aid for yellow cab owner-drivers, about four-fifths of whom owe more in debt than their medallions’ current value.

NYTWA says things the city could do to help include urging lenders to lower interest rates and extend payment deadlines, waiving licensing fees, and giving owner-drivers emergency grants to avoid foreclosures and bankruptcies.

It also claimed credit for getting provisions deleted from the bills that would have charged app-based drivers stiff annual license fees and restricted them to working for one company. The IDG also lobbied against those ideas.

NYTWA also wants the state to repeal the congestion-pricing law it passed last March, which levies a surcharge of $2.50 on yellow-cab trips below 96th Street in Manhattan, $2.75 on for-hire vehicles, and 50 cents on ride-share trips. Uber and Lyft have both argued that extending the fees to all vehicles would be the most effective method of easing traffic—and it would also not force them to reduce the number of cabs they have on the road.

“This fight is still to come!” says NYTWA.