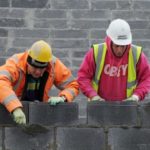 fraudulent public construction contracts worth millions of dollars. Michael Martin, 47, of Latham, and D. Scott Henzel, 52, of Albany have been charged with failing to pay over $400,000 in wages to over 50 employees as well as additional charges.

“As we allege, the defendants crafted a shameful and elaborate scheme to line their pockets at the expense of minority-owned businesses, New York taxpayers, and their own employees,” said Attorney General Underwood. “We will continue to aggressively root out fraud and protect New Yorkers from those who seek to game the system.”

The indictments are the result of a joint investigation conducted by the Attorney General’s Criminal Enforcement and Financial Crimes Bureau, the New York State Office of the Inspector General, and the New York State Department of Labor. If convicted of all counts, each defendant faces up to 10 to 20 years in state prison.

“These two construction executives abused minority-owned businesses and took shameful advantage of a laudable program meant to level the playing field for many small and disadvantaged companies hoping to compete,” said Inspector General Catherine Leahy Scott. “The integrity of the programs encouraging the use of women and minority owned businesses in New York is critical to the government contracting process, and I will use all the resources at my disposal and work closely with my law enforcement partners to pursue anyone who tries to defraud it.”

As the Attorney General alleges, the defendants devised a scheme to enrich themselves at the expense of laborers, minority-owned businesses, and numerous state, county, and local agencies. The scheme included the identity theft of two minority-owned businesses, Lorice Enterprises, Inc. and Precision Environmental Solutions, Inc., as well as the theft of prevailing wage benefits from over 50 employees of Eastern.

Department of Labor Commissioner Roberta Reardon said, “Under Governor Cuomo, New York State will not tolerate any abuse of workers, especially stealing their hard-earned wages. The actions of these bad actors are particularly egregious —  the purchase of lavish vacations, motorcycles, jet skis and RVs with funds stolen from the pensions of hard-working New Yorkers is an example of the type of fraudulent and criminal behavior that we absolutely will not stand for.”