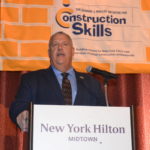 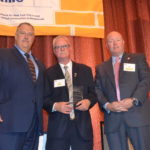 within the construction trade. It began in 2001, and is now a nationally recognized model for addressing training and employment issues in the industry. It has opened doors to real careers with good wages and benefits, and through that, strengthened communities. Those it trains come from diverse communities throughout the five boroughs, and the program has resulted in African-Americans, Hispanics, and Asians becoming the majority of new union members in the industry. Training imparts skills needed to work on New York City’s skyline, roads, bridges and tunnels, along with other infrastructure, jobs that require the best-trained, safest construction professionals in the world. Students take a weeks-long course and are then contacted for apprenticeships within the trade.

Dolan began the evening by telling the assembled crowd that, as of September 2017, Construction Skills has “placed more than 1,900” graduates. “These opportunities help to empower individuals and strengthen 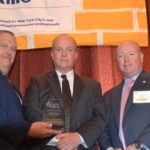 communities,” he said. “Tonight we honor individuals who have made a significant contribution,” to these efforts, he added. LaBarbera spoke next, beginning by asking for a moment of silence to honor the late Construction Skills Board Member Dennis Ippolito, formerly Business Manager at Local 12. “Rest in peace, Dennis,” he said, fighting back tears. Next he thanked all the sponsors of the event, saying, “We raised over $200,000 tonight.” He also thanked Board Members and Officers for the “great job” they’ve done, adding, “By early next year we should exceed 2,000 graduates of the program.” He then went on to introduce a special guest, Commissioner of Labor Roberta Reardon, who he called “absolutely wonderful” in her job. “The woman does not stop going,” he said, describing her work ethic. Reardon addressed the crowd, congratulating them on their recent win at City Hall, with the passage of Intro 1447, which mandates that all contractors, union and non-union alike, provide a basic, standard level of safety training for all of their workers. She congratulated the night’s honorees, saying, “The Construction Skills program truly represents diversity, and most importantly results. You’re setting so many young people up for not just a job, but a career that will support their families for the rest of their lives.” She also noted that other industries such as health care, cyber security, computer programming, financial services, insurance claims adjusters, and early education are following suit with offering apprenticeships. “As Malcolm X said, ‘Education is the passport to the future,’ she added. “I think you guys rock!” she said to applause.

Connors was the first honoree to take the podium. He has over 35 years in the unionized construction industry, and has held several elected offices. LaBarbera introduced him, thanking him for “all his work in advancing the interests of working people and diversity….Kevin Connors has been a change agent in Local 28…74% of the apprentices in Local 28 are minorities…50% of current membership are minorities…During Kevin’s tenure, he’s increased the number of women from 3% to 13%…Kevin needs to be recognized for what he’s doing for his union.” Connors accepted his engraved glass award, saying, “I’m honored to be a part of it…thank you to Construction Skills for all you do, and all the people you bring in.”

Next, O’Hare received his award. O’Hare leads the Building Contractors Association’s (BCA) negotiation and administration of collective bargaining agreements with building trade unions in the industry within New York City and Nassau, Suffolk and Westchester counties. LaBarbera said, “One of the things that means a lot to me is the BCA’s commitment to safety…We don’t succeed in this business without loyal, committed contractors… During this time of high fatalities [in the construction industry] BCA has stepped up to the plate to support unions…” LaBarbera also spoke of O’Hare’s contribution to the establishment of funds to go to the families of those killed on the job, union or non-union, to help defray the cost of funerals. O’Hare thanked the Association and fellow honorees, apprentices and grads of the Construction Skills program, saying to the latter, “Your time will prove to be well spent.” He spoke of the current boom in the NY construction industry, with its opportunities and challenges, emphasizing that there are “risks on the job,” and saying “we are willing to invest to make sure they [workers] are safe.”

Zarrilli, who oversees the administration’s integrated action on climate change mitigation and adaptation, as well as the coordination of the City’s OneNYC program, was next. LaBarbera cited Zarrilli’s help with a post-Sandy plan to employ people in their communities in re-building their own areas, and NYC project labor agreements. “Dan is the kind of partner in government we want to work with…[who is] committed to the principles of middle-class jobs, and [sees that] jobs in construction are paths to middle-class jobs.” Zarrilli said, “I’m pleased and honored to be here on behalf of Mayor de Blasio…since 2001 Construction Skills has been doing amazing things to create jobs in NYC.” He said the program had offered “life-changing opportunities,” and spoke about upcoming retrofit jobs that await graduates, saying they are “not just jobs, but good careers for NY-ers.” He accepted his award from LaBarbera.

Bertran next welcomed a large group of Construction Skills graduates from various years onto the stage, and introduced a number individually who now held good jobs because of the program. “The impact of community is a tremendous accomplishment,” she said. One, Sean Perry, currently an Apprentice at Local 28, spoke of being previously homeless, and how now, he has an apartment. “God is good,” he said, and thanked Bertran and the Construction Skills staff. Another, Joshua Ramnanan, a Foreman at Local 46, spoke of projects he has worked on, saying the program was “great.” “Thank you for your continued support,” he said, “Without you we could not do what we do.