Nine years after the September 11th attacks, the long-delayed redevelopment of Ground Zero finally has gained momentum. There are now tangible signs of progress with thousands of tradesmen working on the completion of the World Trade Center buildings. The steel framing of One World Trade Center is now visible. "All you simply have to do is look outside and see what is happening," Said Port Authority Executive Director Chris Ward. "There is long and difficult work ahead, we will look back and say this was the beginning," Continued Ward.

While aspects of the development, including four additional towers and a transit hub won’t be finished until 2014, progress can be seen throughout the 16 acre site. After languishing for years, the project received a financial boost this year. The Durst Organization announced a $100 million equity stake in the $3.2 billion project. The World Trade Center complex in Lower Manhattan is bounded by Vesey, West, Washington and Fulton streets.

This past August, a two-year impasse ended. Larry Silverstein and the Port Authority finalized a deal whereby the agency would

provide $1 billion in public funds for the completion of Tower Four.  The deal also calls for $600 million in Port Authority and other public funds for Tower Three, a 1,137-foot skyscraper.
One World Trade Center will rise 1,776 feet when it’s finished in 2013. It will be slightly taller than the original which measured 1,727 feet. The steel framing for 36 stories of the 104-story skyscraper has been completed. Tower Two, a 78-story skyscraper will have its foundations poured in 2011. Tower Five will rise on a site occupied by Deutsche Bank. 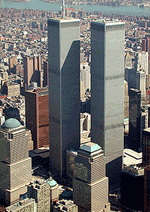 Mayor Bloomberg discussing the progress of the reconstruction stated that “While nothing happens in democracy as quickly as we would like, the truth of the matter is, democracy does get you to the right place, even if it’s sometimes painful and it sometimes takes some time.”

Other major projects planned for the WTC site will include a comprehensive New Jersey’s PATH train station with connections to nearby subway lines. The memorial, will feature two 176-by-176-foot pools, whose square shapes mimic the footprints of the Twin Towers. Water will cascade down the sides of the 30-foot-deep pools, whose walls will be inscribed with victims’ names. They will be the largest artificial waterfalls in America.

The museum will include remnants of the Twin Towers and September 11 attack including a fire truck and ambulance damaged during the attacks, and a 37-foot-tall steel column that survived the building collapse. The museum also will include a facility run by the New York medical examiner’s office to continue processing unidentified human remains. “The museum will be the spiritual and emotional heart of the site,” says Mayor Bloomberg.

Approximately 2,800 people died on September 11, 2001. Al-Qaeda hijackers flew two 767 jets into the complex, one into each tower, in a coordinated suicide attack. Burning for 56 minutes, the South Tower collapsed. A half-hour later the North Tower

fell. With devastation throughout the complex and environmental concerns remaining downtown for several years after the attack, many were pessimistic about the rebuilding of the World Trade Center and the future of lower Manhattan.

The area around Ground Zero is now a very different place than in 2001. The residential population has now doubled, to over 60,000 with businesses moving into the area daily. The future World Trade Center with a projected 12 million square feet of office space, half a million square feet of retail, thousands of additional jobs for New Yorkers and a quarter million people passing through the commercial and memorial complex every day, will re-defile lower Manhattan.

“At the end of the day we’re going to have a showpiece here that we are enormously proud of,” said Larry A. Silverstein, President and CEO of Silverstein Properties and developer of the World Trade Center.