New York, NY – Columbia University continues its attack on unions and on April 24th its teaching and 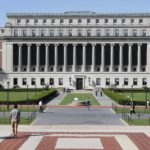 research assistants went on strike. The strike was held from April 24-30. With the backing of city and state labor organizations, demonstrations are continuing to take place at the college.  However,  Columbia University is still refusing to recognize and bargain with United Auto Workers Local 2110’s Graduate Workers Union.

GWU was formed in 2014 to represent teaching and research assistants at Columbia University.  The college has not recognized the union as the legal bargaining representative and refuses to negotiate with the union. Columbia has consistently exibited anti-union policies. Colombia president Lee Bollinger has never talked with any campus union representative, which include United Auto Workers Local 2110, 1199SEIU and Transit Workers Union Local 241. Columbia has always waged  war on unions. The college consistently eliminates unionized  positions when workers quit or retire. The university also changes job titles creating non-unionized positions.

On January 30, 2018, after three years of legal delays, Columbia officially announced it would not recognize the Graduate Workers Union or teaching and research assistants as workers. Columbia pointed to the Trump administration’s recent reversal of a 2016 National Labor Relations Board decision to recognize graduate students as workers .

As Columbia was battling GWU, it was also waging  war against 1199SEIU’s attemp at organizing medical assistants. The two unions began joint actions in February along with a big gun,  the Central Labor Council and its affiliates.

With many labor organizations supporting the organizing campaign, regular demonstration and rallies were planned leading up to the April strike.

The week of the strike not only included the campus unions of  1199SEIU, TWU Local 241 and UAW but also a cross- section of labor including building trades, RWDSU, Teamsters, CWA, AFSCME, TWU, and many other local and national organizations. The streets around Columbia were filled with demonstrators holding union signs.

Labor Urged to Join Medicare for All Fight