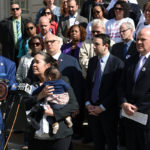 gender bias.”
“The city is using this as a bargaining chip against a majority female union,” Mulgrew said, testifying at a joint hearing before the City Council Committee on Education and the Committee on Civil Service and Labor. “If the mayor and other city officials were to experience pregnancy, we wouldn’t have an issue at the bargaining table anymore.”

Under the current city policy for municipal employees, new mothers must pay for their own maternity leaves using saved or borrowed sick days. Fathers, same-sex couples and all adoptive and foster parents do not qualify. The mayor has extended paid parental leave only to nonunion managers in exchange for concessions he imposed that the city’s Independent Budget Office calculated were worth $8.2 million compared to the $2.4 million the benefit cost the city in the first year. The state government’s new family leave policy does not cover municipal employees, either.

The UFT launched its paid parental leave campaign in November 2017 after nearly two years of negotiations with the city failed to produce an agreement at the bargaining table. Thousands of UFT members sent emails to the mayor in January telling him to support paid parental leave. In the days leading up to the Council hearing, UFT members shared their personal experiences via email with the mayor and the City Council Education Committee Chair Mark Treyger.

Mulgrew was joined at the hearing by three teachers who told personal stories about how a lack of paid parental leave affected their families.

“When I needed support as a father, the city’s answer was no,” said Eric Rubin-Perez, a school counselor at the John F. Kennedy Jr. School in Queens.

After almost 10 years in the New York City Department of Education, Rubin-Perez had accumulated 65 sick days when he became a father in 2013.

“To my shock, I learned that as a father, I was only allowed three personal days,” Rubin-Perez said. “I understand that being a parent is about sacrifice, but this is an easy, clear, progressive step that New York City could take.”

Jessica Jean-Marie, a dean at Harvest Collegiate HS in Manhattan who just returned to work after 11 weeks at home with her second child, described the anxiety of making the difficult decision to take an unpaid leave to extend her time with her newborn.

“Do I borrow enough days to cover six weeks? Can I afford to do that? Should I go back to work sooner? The amount of questions and stress to deal with is overwhelming,” she said.

Carolyn Dugan, a special education teacher at PS/IS 180 in Manhattan, noted that the city’s “antiquated” policy had forced her to return to work just seven weeks after a C-section, at a time when she was getting only two hours of sleep per night. Six years after the birth of her first child, she is still 17 sick days in debt, she said.

Bob Linn, the commissioner of the city’s Office of Labor Relations, which represents the mayor in negotiations between labor unions and the city, repeatedly insisted in his testimony that he was optimistic that the city and the union would come to an agreement on the issue.

But, he said, “this is a matter that needs to be left to the bargaining table … Making proposals in public is counterproductive.”

“In order for collective bargaining to solve problems, you need responsible parties on both sides,” he said.

“It’s the height of hypocrisy for the city to make an announcement granting paid parental leave to city managers and then play two years of games with the union.”

“No paid parental leave for city workers is a mark against our claim to being a progressive city,” said Brooklyn Councilman Stephen Levin in a tweet on the afternoon of the hearing. “Health and family considerations don’t belong on the bargaining table.”

Councilman Treyger, a former teacher and UFT member, urged the administration to view paid parental leave not as a bargaining issue but one of “moral justice, fairness and basic decency.”

“We need equity and excellence not just as a DOE slogan, but applied in practice,” Treyger said.

More From the Street: Bail Reform and the Release of Those Who Pose a Threat to Our City

‘Broken’ US Labor Law Blamed for Drop in Union Membership