Chicago, Illinois – About 100 musicians in the Chicago Symphony Orchestra have traded their instruments 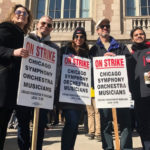 for picket signs, striking to demand a contract that protects their pension plan and provides fair wages. The strike began on March 11, a day after the musicians’ contract with the orchestra ended, as the orchestra sought to replace the musicians’ defined-benefit pension with a defined-contribution plan.

“This is simply unacceptable because it would remove the guarantee of a retirement pension, which we have relied upon for nearly 50 years,” said John Bruce Yeh, who has played clarinet with the Chicago Symphony Orchestra for 42 years.

The pension issue has created a bargaining stalemate between the musicians’ union, the Chicago Federation of Musicians, and the orchestra for the past 11 months. Yeh says the pension is particularly important due to the strenuous nature of the musicians’ work.

“Playing orchestral instruments professionally can be quite physically demanding, as much as playing professional sports,” said Yeh. “In order that we musicians can adequately take care of ourselves during our retirement years, we have relied on the defined-benefit pension as a major source of income after we are no longer able to draw a salary.”

The defined-benefit pensions the musicians and their union are fighting for are an increasing rarity in the U.S. workplace. The share of private sector workers who had such a plan plunged from 88 percent in 1975 to 33 percent in 2005, according to the Center for Retirement Research at Boston College. Today, only 17 percent of U.S. workers have access to a defined-benefit retirement plan, according to the U.S. Bureau of Labor Statistics.

According to Emma Gerstein, a flutist for the Chicago Symphony Orchestra, the musicians are also striking because their wages have failed to keep pace with inflation and have begun to lag what some of their peer orchestras offer. The orchestra has proposed a raise to the musicians’ base pay of 1 percent in the first year of the contract and 2 percent the following two years.

“We have all trained most of our lives — many of us since age 2 or 3 — to become professional musicians, and we feel incredibly lucky to have landed a spot in such a renowned orchestra,” said Gerstein. “However, if we continue to make concessions in the contract, this orchestra will be in danger of no longer being the dream job for all musicians.”

Striking has forged new bonds among the orchestra’s musicians. “When you walk the picket line for three, four, sometimes six hours a day, you end up having a lot of time to talk,” said Gerstein.

The musicians’ fight has also inspired support from the community.

“Teachers, theater musicians, screen actors, construction workers, Teamsters, laborers from all walks of life have come out to walk shoulder-to-shoulder with us on our picket line,” said Yeh.

While all the support is welcome, in the end, the musicians just want to go back to work with a fair contract.

“We all look forward to getting back inside the hall so we can do what we do best,” said Gerstein. “Play music!”