Cheliotes, Retiring From CWA, Reflects: ‘We Haven’t Been Sorry to Take Stands’

At the end of this month, Arthur Cheliotes will retire after 38 years as president of Communications 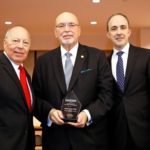 Workers of America Local 1180. In those years, the union, which represents more than 8,500 administrative and supervisory employees at city agencies, state courts, and nonprofit organizations, became a voice in the city’s labor movement far beyond its small size. “We took on the things that people thought we shouldn’t bother to take on. How are you going to fight the city on discrimination against women and minorities?” he says. “I think I got that from my dad. He had the courage. And I haven’t been sorry to take stands when I needed to take stands.”

Speaking with LaborPress in a 45-minute telephone interview, Cheliotes expressed optimism about Local 1180’s future. One reason he decided to retire, he says, is because “there were capable and good people with their hearts in the right place and sharp minds that were ready to step up,” including secretary-treasurer Gloria Middleton, who will succeed him as president; first vice president Gina Strickland; second vice president Gerry Brown, and recording secretary Lourdes Acevedo.

But he’s also deeply pessimistic about the prospects for working people in general. “Unless there’s a dramatic change in our political and economic system,” he says, “I fear for my children. I fear for my members.”

Cheliotes, 69, came up in Local 1180 during the brutal layoffs and budget cuts of the city’s 1970s fiscal crisis. But his tenure as the union’s head was defined by struggle against the changes wrought by Reaganism, the social and economic consequences of its anti-worker agenda and mentality.

“So much power has gone into the hands of the few at the very top that there’s not even a semblance of democracy now. It’s truly an oligarchy,” he says. “You have a government that has been proposing now for over a year to let people die because they don’t have access to health care, to take away their access to health care because we don’t care if they die. In most societies, we call that murder.”

Ronald Reagan’s line that ‘no one from the government’s going to help you’ was “a big sea change from when I was growing up, and government did help you,” he says. “It offered a free college education that I could get as the son of an undocumented immigrant and a refugee from the Nazis.”

He and his first wife, a teacher, were able to buy a house within three years after they graduated from Queens College in 1970. But now, “my children still can’t afford to buy a house, and they’re in their forties, because the system changed.”

That anti-government attitude, along with shifting the tax burden to working people, has fed resentment of public workers, he adds. “It’s a myth that’s out there that taxpayers pay for our pensions. The reality is—I’m in Tier I—when I finally get a pension check, that pension check is going to be 90% my money and return on investment over the 45 years I’ve been contributing to it. Ten percent will be the employer contribution,” he says. “When you look at the upper tiers, Tiers IV and V, that’s virtually all paid by the workers with their own contributions. It’s no free lunch by any stretch of the imagination.”

Reagan’s tax cuts for the rich also allowed for the concentration of the mass media, he adds, “which is why we appreciate LaborPress, because it offers an alternative voice for us. We need to expand it so that the voice is heard beyond the labor movement.”

One of Local 1180’s biggest victories of his tenure came last April, when it reached an out-of-court settlement with the city that will bring substantial raises for   members who have been underpaid for almost 40 years. As women and black, Latino and Asian workers began moving up to managerial jobs that had been held by white men, “the jobs stagnated,” he says. The Koch administration blocked them from being promoted by filling posts with people in provisional titles, and when they finally moved up, the Giuliani and Bloomberg administrations “depressed their wages.”

It was “one of my proudest moments, because I’m a white man leading a union that’s predominantly women and minorities.”

Another reason he’s retiring, he says, is that he’s going to be 70 next year and doesn’t want to work six days a week any more. More important, he adds, his wife doesn’t want him to. She wants him to travel and spend more time with their four grandchildren.

“I’m not totally going away. We’ve already built an office for me right next to the president’s office,” he continues.

He’ll be working two days a week. One project will be trying to get the Murphy Institute, the City University of New York School of Labor and Urban Studies,  elevated to a full school of the university.

A related project will be expanding education and training for city workers to move up. As much as one-third of the city’s workforce will become eligible for pensions in the next five years, he says. “What is the city doing to invest in the workers who are going to move up to fill the shoes of those who are going to be retiring?”

Local 1180 put in a program for members to get degrees in public administration, so that when they move up in the ranks, “they understand the bigger picture of how government works, not just how their agency’s working,” as well as a 12-credit certificate in health-care administration. The union also worked with the United Federation of Teachers to create evening classes for paraprofessionals to become teachers, and with the International Union of Operating Engineers for heating and air-conditioning   mechanics to learn how to be building managers. And CUNY already has centers that could offer information-technology classes.

“My hope is that an enlightened management on the city’s side will begin to work with us to achieve that.”

But to turn the tide against the broader anti-worker climate, the labor movement needs to understand the bigger macroeconomic problems, he says. “Some of my colleagues do get it, but a lot of them are in their little stovepipe sectors looking to protect their narrow interests, ignoring that what’s going on on a larger scale is really going to doom us in the long run.

“It’s going to take building movements,” he continues. “If the labor movement thinks they can do it by themselves, they are going to be rudely, rudely awakened to the fact that they cannot. If you don’t have coalitions with like-minded people who are seeking to return power to people, seeking to restore our democracy, the labor movement will be—there will be very little left of it in the next decade.”

One set of likely allies, he says, would be the millennials who have been “the victims of Reaganomics,” who have grown up with the burden of student loans, the costs of for profit health care, and the decline of the labor movement. He also believes that the labor movement has failed to get small-business owners to understand that a union-secured middle class would be good for their businesses.

His father, a Greek immigrant who ran a diner at the Queens Village Long Island Railroad station, did get that, he recalls. When the city’s transit workers went on strike in 1966, a customer said, “‘Hey Nick, you’re losing a lot of money with the bus drivers not coming in.” His response was, “Yeah, maybe I’m losing a lot of money today, but tomorrow they’ll get a raise, and they’ll spend more money at my diner.’

“He understood the basic class politics, with a fifth-grade education. That some people still don’t get today.”