Carpenters Try to Nail Down Post-Sandy Relief Efforts; Look to Rebuild In Era of Climate Change

Carpenters Try to Nail Down Post-Sandy Relief Efforts; Look to Rebuild In Era of Climate Change 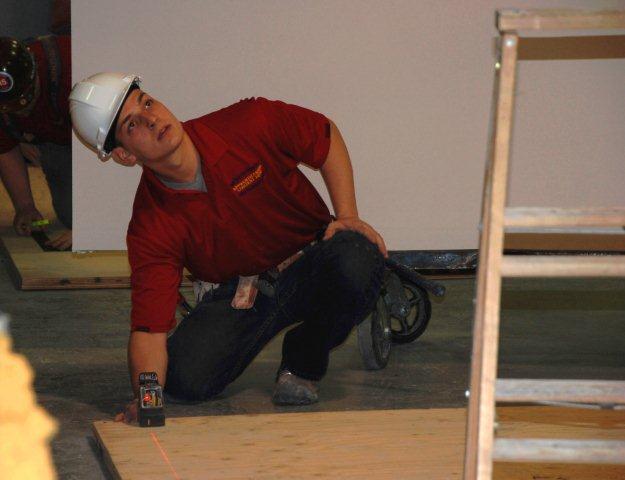 With the the power back on at their Hudson Street offices on Monday, October 5, the NYC City Council of Carpenters set about coordinating its Post-Hurricane Sandy relief efforts in areas where they might do the most good.

“We were trying to do it last week by email, text and phone, but that was sketchy at best,” NYC District Council of Carpenters Executive Secretary-Treasurer Michael Bilello told LaborPress. “We’re trying to identify our members, where they are, and what their needs are – as well as local communities, and how we can also be of assistance to them. We’re trying to figure out the logistics today. We just don’t want to be out there winging it.”

City Hall has already called on the more than 25,000-member strong Carpenters Union to help transport sorely needed supplies on devastated Staten Island. But like practically everyone else in the aftermath of Sandy, a lack of gasoline has so far stymied their best efforts.

“Gas is the big issue,” Bilello said. “We have the people, we have the vehicles – but we don’t have the fuel.”

The labor union, which represents millwrights, dockbuilders, timbermen, cabinetmakers and floor coverers, as well as carpenters, is also establishing a new charity to help those devastated by the storm.

“As we progress, we’re looking at getting our contractor associations involved where whole areas are devastated, and there’s FEMA money going to be pumped in,” Bilello said. “We will get good contractors in there that can do good quality work. And we can talk about a PLA [Project Labor Agreement] or some kind of agreement where we can get the job done fast, we can get it done right – and we can get it done within the budget allowable. The mindset that we’re in today, however, is, ‘What can we do immediately? What kind of fund can we set up? And how do we spend that money so it does the most good for the most people without it getting wasted?'”

A new NYC District Council hotline set up to lend assistance to storm victims, as well as provide opportunities for volunteers, is already ringing off the hook.

“We’re hearing from members who are in dire need, as well as members who want to volunteer,” said NYC District Council of Carpenters Director of Communications Kwame Abasi Patterson. “Right now it’s a step by step process. Down the line, we do want, and we ask for, and we do demand responsible developers and contractors come in for this relief and clean up effort. But right now, we’re hearing from a lot of members who just want to volunteer their expertise on these jobs. As we move along, we will find out the extent of the damage and where our members need to be deployed. We’re now setting that up through this hotline.”

After experiencing the unprecedented devastation that Hurricane Sandy has wrought, union leaders say that climate change can no longer be denied, and that serious changes need to be made when the city finally gets around to rebuilding.

“I think any rebuilding done by the water has to be designed to withstand this kind of a disaster,” Bilello said. “When it comes to rebuilding, we can play a big role as part of the construction industry. There’s a lot that certainly can be talked about in regard to design – and we’d like to be a part of that conversation.”

Not surprisingly, Governor Andrew Cuomo sparked the ire of some Republicans when he acknowledged Hurricane Sandy’s link to man-made climate change.

In a press conference following the historic storm last week, the governor said, “Part of learning from this is the recognition that climate change is a reality. Extreme weather is a reality. It is a reality that we are vulnerable. There’s only so long you can say, ‘This is once in a lifetime, and it’s not going to happen again.'”

Just a few weeks ago, the NYC District Council of Carpenters partnered with Cornell University’s Global Labor Institute in hosting labor union leaders from around to discuss the threat of climate change.

“It’s kind of eerie that we did that two weeks before this whole incident,” Patterson said. “We were talking about old infrastructures and how labor now needs to look towards the future in rebuilding these major cities. We haven’t seen a lot from the government – both federally and locally – in terms of climate change. We’ve even seen denial of climate change. But, if they’re not going to do anything about it, we’re going to do something about it.”

According to Bilello, Hurricane’s Sandy’s unprecedented ferocity should serve to reinforce the need to acknowledge climate change’s reality.