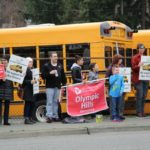 in Carson, Calif. voted by a 2-1 margin to join Teamsters Local 572. The workers will join more than 500 Durham School Services employees already represented by a Teamster contract.
“Congratulations to our newest members in Southern California, who were united in the face of a nasty anti-union campaign on behalf of the company,” said Teamsters Passenger Transportation Division Director and Local 572 Secretary-Treasurer Rick Middleton. “These workers stood together, and staying together is the most important thing now as we turn our focus to negotiating a strong contract.”

Workers reported many concerns about their working conditions. These included bus safety, favoritism and a lack of a seniority-based system for route assignments and wages, as well as no paid holidays. Leroy Hose has been a Durham school bus driver for three years. He was one of the most active leaders in the union organizing effort at the Carson yard.

“Initially, I was going to quit because I didn’t like some of the things that were going on, but then I realized I might go to another yard and have the exact same issue, so I figured I should stay and try to make a difference,” Hose said. “Eventually, people here said enough is enough, and everyone decided to bring Local 572 in. I’m happy that the membership of the yard can see the big picture of how bright the future can be for us.”

Workers at Durham School Services faced an intense campaign by the company, who spread misleading and inaccurate statements about the union that left many feeling intimidated and confused. Despite these efforts, the workers stood strong.

“I told my coworkers, ‘if you decide to vote no now and the union goes away, nothing is going to change,'” Hose said. “We saw some things change after we filed a petition, but we knew that promises from the company could be broken, and we can do more with a union in the long run. We know that in order to have a chance, you need the union, because Durham has power, and they use it to their advantage. We need to have a structure, and bringing in Local 572 will help give us a structure here. That way we can have a voice in every day decisions.”