It’s been a bruising five-month campaign for the 282 Cablevision workers in Brooklyn. But on Thursday, January 26, they made history by voting 180 to 86 to enter the ranks of CWA Local 1109. Some workers with the company for many years said Thursday’s victory is bittersweet because past organizing efforts had failed.

At 5:30 pm, at one of the three garages Cablevision workers report to for work in Canarsie, two National Labor Relations Board representatives at the front of the room packed with workers and Cablevision managers, began the ballot count.

The NLRB rep announced, “Yes,” after unfolding the first few ballots, interspersed with some “No’s” thereafter. But it was clear from the piles of ballots that were quickly piling up that the “Yes’s” outnumbered the “No’s.” 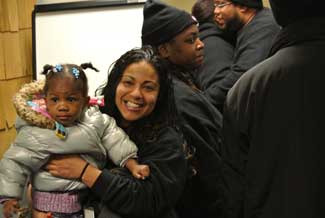 Tim Dubnau, an organizer for CWA District 1, was keeping count in the front row, and when he realized the workers had achieved the necessary majority before the NLRB rep finished counting, he turned around to motion to the audience they had the votes.

Chris Calabrese, executive vice president of Local 1109 and lead organizer for the union campaign, said, after five long and grueling months of organizing, that he felt he was on cloud nine.

“To win this convincingly, almost 2 to 1, I hope it sparks similar victories across the country.”

Calabrese also said an organizing drive is like being on a roller coaster.

“Day after day, there are highs and lows. I remember one meeting I said to the guys you look scared. And they were scared because the company was punching back real hard. But by the end of the meeting they were motivated again. I don’t deserve the credit, these workers here do,” Calabrese said, pointing to the workers who gathered outside the shop after the vote to celebrate. 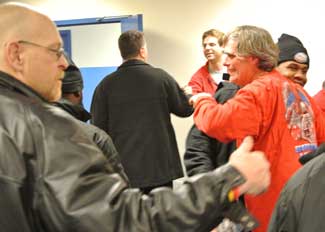 Dubnau, who was reluctant to give NLRB credit despite recent and unrelenting Republican attacks to underfund or eliminate the agency, said, “The NLRB should have held an election weeks ago. But the employer was successful in stalling, so this victory goes to these workers who stood up for each other.”

He added, “These guys walked through fire to get a union. You shouldn’t have to walk through fire in this country to get a union (ask the GM workers from yesteryear who had to stage sit-ins for union recognition), but they did it and now they have one.”

Jerome, a Cablevision worker for nine years, said, “Tonight’s victory is a long time coming. I thank the CWA from the bottom of my heart for putting this altogether.”

He noted that the first item that needs to be addressed when the union sits opposite management is wages. “We need a living wage so we can take care of our families. We shouldn’t face a horrible choice between paying the oil bill or buying our children’s medicine.”

Jerome was on the 29-member organizing committee that worked tirelessly to persuade their fellow co-workers to vote union. He enjoyed the experience, although it wasn’t always pleasant. The company at one point threatened him with false allegations, but he held tough, which he attributes to his lineage.

“My grandfather drove a bus for 50 years as a TWU member and my father was a UFT member, so I know how a union will benefit us, and even the company because we’ll be able to work better knowing we’ll no longer be intimidated.’

Calabrese told LaborPress last week that the last seven days before a union vote is the toughest because a company will try every tactic to prevent a unionized workforce. When asked if Cablevision CEO James Dolan appeared at any of the three garages in the final week to personally appeal to the workers, Calabrese said no.

“Cablevision is probably feeling bad right now, but we want to work with them. We want Cablevision to be successful, but we also want our new union brothers and sisters to be part of that success.”