BTEA President & CEO Louis Coletti said that the impressive turnout “shows the support given to the organization, and means that we are hitting all of the key elements.”

“The work of these four honorees is essential in sustaining this industry during rough economic times,” Mr. Coletti said. 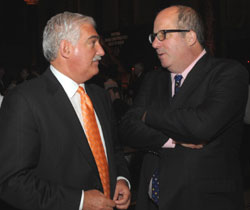 Bruce Ratner, Chairman and CEO of Forest City Ratner Companies (FCRC), received the Charles Eidlitz Leadership award. Mr. Ratner has led FCRC to prominence as one of the foremost urban real estate developers in the U.S.

Gina M. Addeo, CEO of Adco Electrical Corp, GMA Electrical Corp and Scholes Electrical and Communications in New Jersey, was presented with the John A. Cavanagh Outstanding Service Award. In 1993, Ms. Addeo was the first woman in New York City to receive her Master Electrician’s License, and has over 25 years experience in the electrical industry.

The 2010 Safe-in-Sound Excellence in Hearing Loss Prevention Award/National Institute of Occupational Safety and Health was presented to Commissioner Cas Holloway, New York City Department of Environmental Protection. Joining the Mayor’s office in 2006, Mr. Holloway was tasked with finding solutions to some of the City’s most complex challenges, and was instrumental in writing and implementing the Administration’s report on the health impacts of the September 11th attacks.

Further praising the evening’s honorees, Mr. Coletti said that their persistence and dedication was admirable. “From Bruce going through a difficult public review process and numerous law suits – all of which were decided in court, to Gina who has been instrumental in establishing a mentoring program to help minority and women owned firms to becoming union contractors.  They’ve had huge accomplishments, but this is not the end of the road.”