Broadway Salutes Its Own November 13th 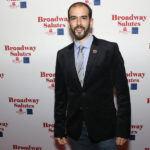 2018 at Sardi’s Restaurant,. The event is presented by The Broadway League and The Coalition of Broadway Unions and Guilds (COBUG). This year’s host is six-time Tony Award nominee Danny Burstein.

In this industry-wide reception, theatre professionals will receive special recognition for having worked 25, 35 and 50+ years on Broadway. Broadway Salutes honors theatre professionals who have dedicated their careers to the success of Broadway. Since the first ceremony in 2008, Broadway Salutes has honored more than 5,000 members of the theatre community.

“It’s remarkable to think that the newest among this year’s inductees made their Broadway debuts in 1993 and have forged careers of 25 years and more. Broadway Salutes is our chance to celebrate these extraordinary Broadway vets who make vivid and vital Broadway theatre year in and year out,” said Thomas Schumacher, Chairman of the Broadway League.

Broadway supports thousands of jobs and generates $575 million in taxes to NYC. During the 2016-2017 season, Broadway as an industry contributed $12.63 billion to the economy of New York City which included both direct and indirect spending.

“Each year over 89,000 craftsmen and women, artists, professionals, and a myriad of other who are never seen by the audience, make Broadway work. Our goal ten years ago, when we began ‘Broadway Salutes’, was to recognize and thank our colleagues for their tremendous talent, tireless work, and their commitment over many years to the industry that makes New York truly distinctive,” said Laura Penn, SDC Executive Director, on behalf of COBUG.

Two Years of Covid: How the Workers’ Comp System is Responding